Give moderators per-site “badges” in chat

This isn't for "badges" in the "achievements" sense as it is commonly seen here. This is for the "identification" type of badge.

This idea occcured to me when I first visited The Assembly. Since this is a chat room specifically created for users of all StackExchange sites to have easy access and visibility to moderators from all over the SE network, I figured it would be good if there was an easy way to figure out who's who in the room.

Most users have their primary site tagged in their chat profile, and most moderators also have mention of the sites that they moderate. However, there's a few problems with this, all really stemming from one:

What I'm suggesting here is that there be another section put into the chat profile, preferably near the top, so that users can see who moderates where. This should be fairly prominent and visible when a user clicks on a moderator's icon in chat. It should also be automatically populated by the system, or manually by SEI as part of conferring moderator status to a user. This can be done by a simple text list, or by badge-like icons.

We've already had a short discussion about this in The Assembly.

As @kiamlaluno has mentioned, and I've also touched on, the linking of one's primary site to their chat profile is a necessary part of becoming a moderator. This gives a fair indication of where one moderates by putting the site icon and a link to their site profile in their chat profile. However, there's still a not-insignificant percentage of moderators who handle multiple sites and would not be fully served by the existing system.

In all, we have 23 out of 272 moderators who are multi-site mods. That is excluding those who inherit their MSO moderator rights from being moderators on SO. This translates to about 8.46% or a little better than one in twelve.

Moderators are already instructed to associate their chat account with the site where they are moderators. This is required for them to access a private chat room for moderators.

As such, the information you are requiring is already reported in the chat account of a moderator. 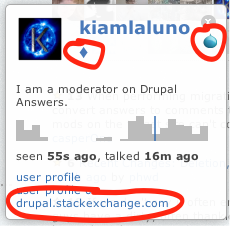 Not the answer you're looking for? Browse other questions tagged feature-request chat moderators .

101
Differentiate between employees and moderators

890
Show all of my question/answers to me even if they are deleted
191
Provide a tool for moderators to migrate comments to chat
140
Full list of Moderators
164
Add escalation system to chat flags
129
Streamline moderators contacting users through chat
1160
Don't throw away all votes when a user is deleted
322
Toward a philosophy of Chat
375
If you're gonna talk Politics, you must respect those who disagree
2210
Firing mods and forced relicensing: is Stack Exchange still interested in cooperating with the community?
1824
Stack Overflow is doing me ongoing harm; it's time to fix it!