While reviewing the flags on a Programmers post I found this: 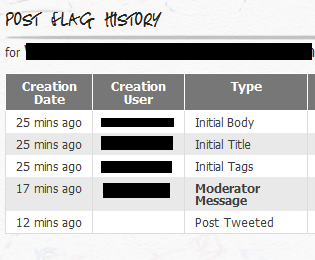 You can clearly see that the post was flagged 5 minutes before the post was Tweeted. While in this case the post remains open, it might not have done and there would have been (another) closed question Tweeted to the world.

Posts with close votes aren't Tweeted so can the same logic be applied to posts with flags?

Of course, once the flags have been cleared and if the post is still open then it should be eligible for Tweeting once again.

95
Is the Very Low Quality flag too ambiguous?
19
Twitter bots share posts with closevotes on them
191
Allow moderators to reply to a flag
156
Allow recovery from flag hellban
35
Comments and posts auto-deleted by community flags should be shown to moderators
388
Add an “I don't understand” option for review audits
85
Raise an automatic flag for spammers
7
Allow high-rep users to recommend posts for and against tweeting
126
Let's get rid of the 10K flag queue
119
Community should not autodownvote “low quality” autoflags cleared by edits