I'm a pro-tem moderator at Writers.SE. I’ll start by saying that closing questions is one of the critical tools for an SE beta moderator. I’m sure this statement is widely agreed upon; I’ll only belabor the point a tad further: while on an established, healthy site, closing questions is “merely” crucial maintenance, for a fledgling beta whose direction and conventions are still being formed and tested, the importance of weeding out poor, misdirected content increases sevenfold.

As discussed previously, closing a question is often perceived as discouraging. On StackOverflow and other established sites, that’s been considered an acceptable consequence or an outright desirable one. This feature request is specifically for SE sites still in Beta, where I think the problem is far more acute.

Why Beta is different

Betas are trying to draw new members from outside the SE/programming community. For SO and other established sites, it's perfectly reasonable to expect (and require) that users read the FAQ, track comments, take the time to understand what's going on and how the system works. But Betas’ explicit goal is to attract new users from diverse fields. Naturally, we’re going to have lots of potential users who might be very interested in what an SE in their field might grow to be, but who might also take a while to understand how it works and what it’s all about. The concepts of a strict Q&A site, of a gamified resource, of the SE tools and conventions, of each site’s goals and guidelines, will be new and unfamiliar to them - and they deserve a bit of slack. On Betas, being less welcoming is significantly more harmful than on established sites.

Betas have low traffic and few questions. While they’re building up steam, many SE Betas just aren’t that active yet. They’re very eager for new questions and new members - perhaps overly eager - and able to put in effort to be encouraging. Under such circumstances, many will prefer being welcoming and helpful over being decisive and efficient. This creates a disconnect between the moderators and the community, with the community shying away from close-voting, and the mods needing to close on their own authority without community backup. My own romping grounds, Writers.SE, which still has very low active membership, certainly suffers from this. If closing questions did not come across as so discouraging, I think dedicated community members would be much more willing to vote to close, restoring community involvement to what it should be.

Betas are still resolving what constitutes a “good question”. Another reason dedicated members are often wary of closing is because Betas are not yet fully defined. When closing feels harsh and final, and a question feels “borderline” or “pretty close,” members hesitate to close since they’re not sure there’s cause. Since SE is so strict on what isn’t allowed, people are slow to go beyond that and close things that might be legitimate.

However, IMHO, these are precisely the questions that most need closing - they need reworking to bring them out of the borderline status, to make them actual worthwhile questions. But heroic edits take time and effort; they don’t happen right away. The result is that members are most uncomfortable with precisely the judgement calls and the constructive editing that are the most crucial to the site - they’re not encouraged to distinguish between kinda-acceptable and actually-good. So here too, the unready nature of Betas seem to demand a closing option that’s more encouraging and less harsh.

I want to see Beta SE’s get some form of friendlier close option - to be precise, something less discouraging. Every time I close a question, I need to explain that despite appearances, the question can be edited and improved, and we’d be happy if OP does so (+ specific comments). I want this to be part of the system, not to seem at odds with it. Examples of solutions:

A “Needs Work” Close Option that could be selected when casting a close vote. Text could be along the lines of:

This question in its current form is a poor fit for the Q&A format of StackExchange. You may be able to edit it; an improved, more appropriate question may be reopened. Please see individual comments posted to your question.

This tiny snippet is something every SE user knows - and something newcomers don’t. This makes a world of difference in the presentation of a closing, at least to the well-meaning enthusiasts who will be interested in learning about the site with just a little encouragement.

Other options I can think of include:

Again, I’m suggesting these changes only for sites in Beta.

I'm open to making close reasons more friendly, but I don't think that it would be enough to achieve what you want. They're still very general and new users might be confused what exactly they did wrong.

What you should do (and are probably already doing) as a moderator on a beta site is to comment on every single question you close, there's even an automatic flag on beta sites nagging us mods to do that. In that comment I usually explicitly mention what the user needs to do to get the question reopened if I think it is salvageable. A tailored comment is IMHO more helpful than fiddling with the close reason, which has to be very general and cannot be as helpful as a manual comment.

That is what the "not constructive" closing reason is about, as it is described using the following sentence:

This question is not a good fit to our Q&A format.

The rest of the description for the proposed closing reason applies to any closed questions: If a question is closed as duplicate, and there are not answers, the OP could edit to make clear it's not a duplicate, or to make clear in which points the question is different from the previous question; the same is true for an off-topic question.

An introductory text is already given for the closed questions, which contains a link to the FAQ. (The images are links to the part of the FAQ linked from the closing text.) 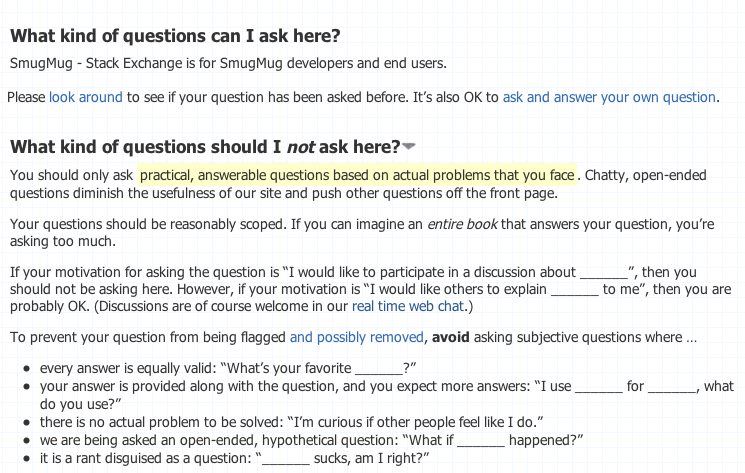 The FAQ suggests the users to look around to see which questions can be asked; the link takes to the search page.

I don't think there is anything else that would require a specific solution for beta sites.

Not the answer you're looking for? Browse other questions tagged feature-request close-reasons beta-phase .

100
I propose changing the term “closed” out for… something else
24
Improve Not a Real Question close reason message
13
Off-topic/non-constructive questions: conflict of interest for beta users?
4
Where's the place to hold discussions about developing beta sites?

890
Show all of my question/answers to me even if they are deleted
258
“You have gained power. Here's how to use it.” kind of message
255
Closing changes: [on hold], unclear, too broad, opinion-based, off-topic reasons, bye-bye to Too Localized
376
Add an “I don't understand” option for review audits
265
Build and strengthen the Stack Exchange community with “crossover questions” between sites
425
Should Stack Exchange in general be awarding “A”s for Effort?
102
The Real Essential Questions of Every Beta
392
Graduation, site closure, and a clearer outlook on the health of SE sites
234
Feedback Requested: Design-Independent Graduation