Is tag sponsorship contributing to confusion between “metro” and “metro-ui”?

But people are still tagging stuff metro when it should be metro-ui. Today I was wondering - do they even read anything we show them? I brought up the tagged questions to easily find the other wrong ones and look what I saw:

I think this sponsorship is "outweighing" the actual text of the tag wiki. Maybe the excerpt should be first. Maybe Soluto shouldn't be allowed to sponsor metro, only metro-ui.

Update: It's been two weeks and the metro folks are still at it. In fact I am now seeing questions tagged with both metro and metro-ui showing that they know about the "right" tag but they think the other one is also right. I don't understand why people are allowed to sponsor "wrong" tags like this. I would really like an answer about that part of it.

metro is ambiguous and has to go, or you'll keep getting questions accidentally tagged to it.

Don't add framework because it adds no value to the tag name.

So, here's the approach I would suggest:

Here is an image explaining it all with tags, SE team, sponsor(s), freehand circles, unicorns and Trogdor: 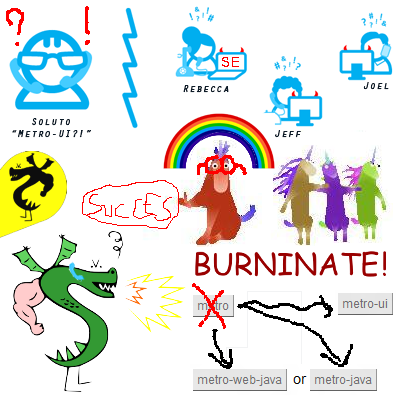 Any resemblance with real-life persons, drakes or unicorns is purely coincidentally...

I think it's pretty clear the answer to the title question is YES. The sponsor info disappeared from both metro and metro-ui two days ago. I have not needed to edit a single tag since then. Not one!

Unless someone else has taken up the torch and has been doing the edits, I think that removing the sponsorship did the trick. I'm actually a little surprised to see such a clear line. If someone knows exactly when it was removed and wants to compare to my edit history, I'd be interested in the time spans involved.

(Damn! After two clear days including an entire Monday, I spotted a mis-tag and fixed it.)

Not the answer you're looking for? Browse other questions tagged discussion tags sponsored-tags .

12
Should the “metro” tag refer to a Java framework or Windows 8 technology?
18
Windows 8 and related tags need a little love
5
What should the tag for the new Windows 8 runtime be?
9
Consensus on taxonomy for Windows Phone, Windows 8, and things named Metro?
-5
Tagging for Metro (Windows 8): new modern-ui tag causes confusion
4
Can the tag-verifying routine react to mismatching (misinterpreting) tags?

253
A real solution to ambiguous tags
250
The homework tag is now officially deprecated
824
Net Neutrality and Stack Overflow / Stack Exchange
343
Let's take a look at the interaction between staff and the “power users” of the network
2393
Firing mods and forced relicensing: is Stack Exchange still interested in cooperating with the community?