How do I deal with wrong or irrelevant edits made to my posts?

So... from a while back, I posted a question dealing with implementing a certain feature within an iPad app (no specifics, see link for question), and I noticed that there was an approved edit by a user named Zephyer who posted something about Windows 7. After a face-palm, I re-edited my question to bring it back in line with my query. So, my question then is: What the heck do we do with the occasional stupid/irrelevant edit? I know it doesn't happen often, but there's got to be something other than just re-editing I can do!

I know it doesn't happen often, but there's got to be something other than just reediting I can do!

Why should there be? It happens. Someone posts a bad edit, others approve it without realizing that it's a bad edit, and it's done.

The best that you can do is fix it and assume that the change was made (and approved) in good faith. Then move on.

The system is good, but it's not perfect.

There is nothing you can do to "punish" the editor, especially when such things happen by mistake sometimes.

The proper approach, in my opinion, is to first Rollback to your last good revision: 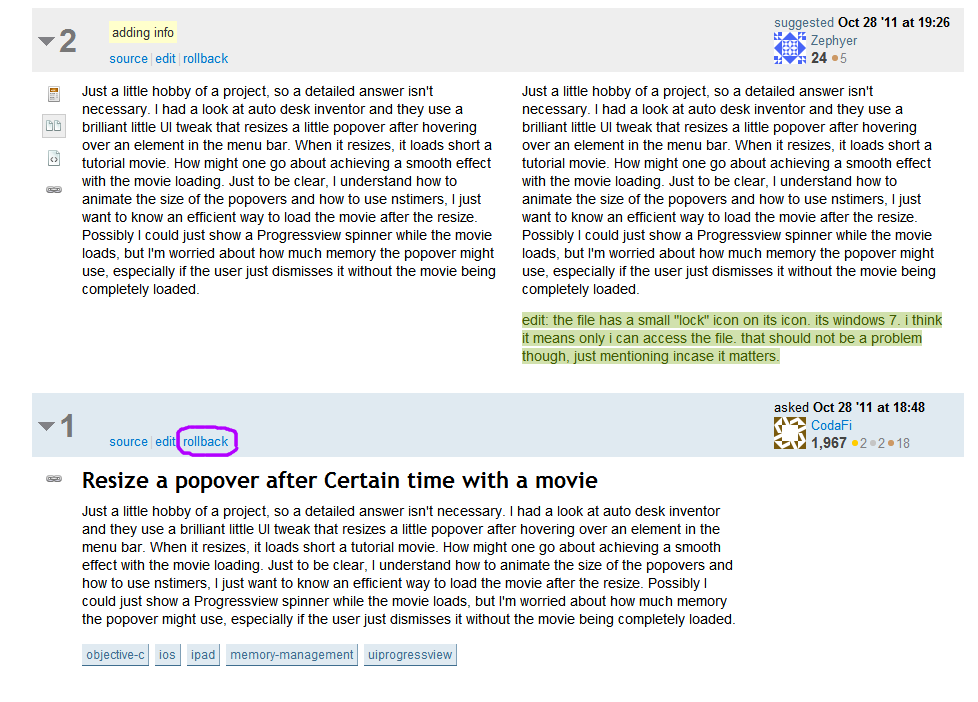 Then check the editor other suggestions to see if it's a one time glitch or rampage of vandalism. In case of the second option, if it's still going on, flag one of his posts (question or answer, can't flag anything else) for moderator attention, choose "Other" and explain what's going on.

Usually the community itself prevent such edit, but some cases slip through as people either think the edit was somehow relevant or just too "kind" and approve almost every edit - I consider this a "known risk" in self governing community but such things can always be fixed so it's not a big deal.

I just wanted to know if there was some way to get the attention of the editor. It doesn't need to be a downvote or a flag, just a message, or an indication.

@kiamlaluno Your edit is not correct: A pancake is not a waffle.

Not the answer you're looking for? Browse other questions tagged discussion edits .

-3
How can I prevent wholesale changes to my question?
2
What do you do when someone (obviously) erroneously edits your answer?
424
What is a 'rollback'?
10
Dissociate from answer after someone edits it?
12
Report vandalism in edits?
0
Is it possible to rollback my posts?