I am editing a question and would like to preview my changes prior to saving. I can see how the page will look and can optionally hide this preview.

However, I would like to see the actual changes that I made; that is, the diff with the red struck out parts and the green newly inserted parts (as is shown when you are comparing versions). A side-by-side and side-by-side markdown preview would be helpful too.

To make sure the basic usage doesn't change, we could by default list a normal preview, like it is now. There could be buttons to change to inline differences, side-by-side differences and side-by-side markdown differences. This could look the same as it does when looking at revisions.

This would make it easier to see the changes, hence preventing an additional edit step. This also helps you write the edit summary, so that you don't forget to mention an important change you made.

I think this is a good idea. I don't have to explain what the advantages would be; the question covers that enough, I think. There are two things I'd like to do with the answer: giving an optional design and discussing the developer's pain to create this.

It could look like this (I used the Electrical Engineering site for these images): 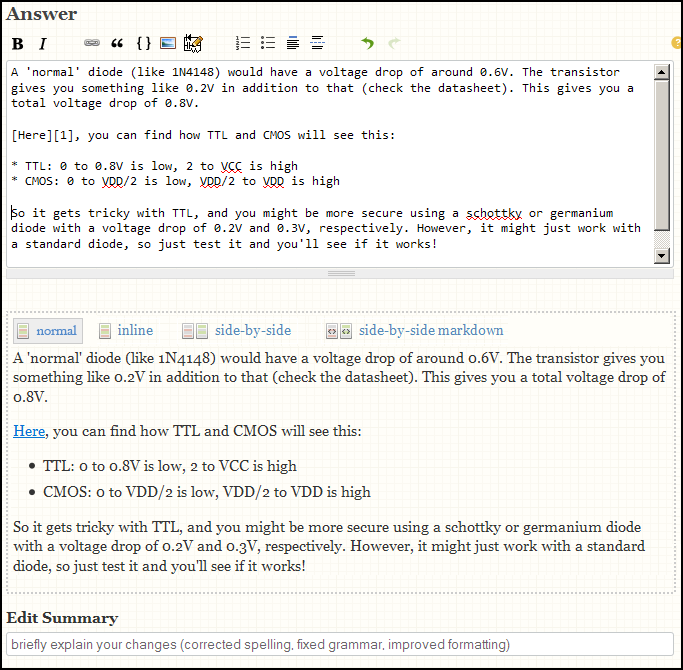 As you can see, I added some options directly above the preview: inline, side-by-side and side-by-side markdown. This is exactly the same as when you're viewing revisions. Because I added a normal option, you won't lose any features you have now!

Now, let's see how it looks when viewing it with, for example, the side-by-side view: 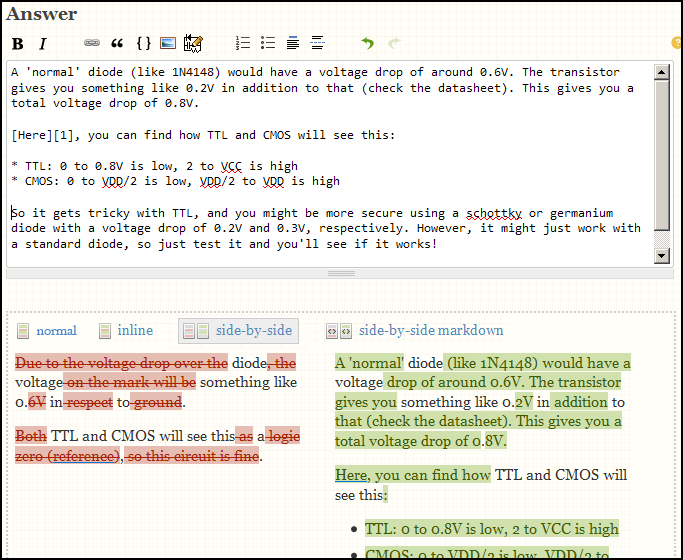 I assume the revision change views are done with the pecl Text-Diff package or its newer version. That means the changes are calculated at the server. That means, there are three options (I think):

I don't have to say why this is a good idea, the arguments are explained in the question already.

Given my design ideas, the user won't lose the preview option he has now (just the new text). The design idea I gave only adds features, without really changing an existing feature.

I'm not sure how much it will take to integrate the ideas. Since the revision changes are calculated on the server and the standard preview is pure JavaScript (I think), it might get tricky.