Chat user has no parent user

There a chat user who has no valid parent user. It is indicated that his chat account is associated to a Maths.SE account, which does not appear to exist. The user was still able to chat.

Is it normal? If it's a bug, could someone look into it?

Edit: if you browse the Google cache for users named Skullpatrol, it turns out a single series of associated accounts. The user is now named Rob. I don't know what went wrong, maybe an account merge or something like that, but it needs someone from staff looking into it with some superpowers.

I also tried to update the parent user of the chat account to this "Rob" profile, but the interface goes all buggy on me (works for other users, fails only for this one): 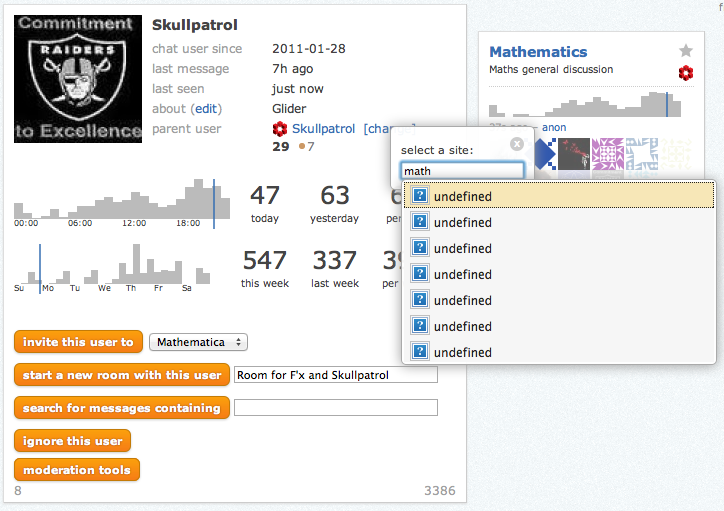 This happened because this user's original Math.se user was deleted, and they created a new one (22862, the one you found), which was then associated with the other accounts the user already had previously. I have fixed up the particular account.

This kind of issue used to be a pretty unsolvable problem (at least as far as automatic handling goes) back when chat was created, but with our not-so-recent-anymore user account backend improvements, this should actually be doable now. So I guess this is a wakeup-call to start improving :)

Thanks for the detective work, that really helped.

Not the answer you're looking for? Browse other questions tagged bug status-completed chat user-accounts parent-user .

4
How to change the parent user on my chat profile
6
Parent profile on chat is not updated if the account is deleted
6
What should happen to a chat account after the parent account was deleted?
3
Finding a SE user from a chat user whose parent user is on a dead site
11
Make account merges propagate to chat
10
Issues with management of chat account profiles and chat parents
7
User exists but clicking on the name shows 404 page
2
How can this chat user chat without a parent user?

6
Problem when creating a new chat room and associating it with a specific SE site
32
Super-pinging users by site account number creates duplicate users, causes confusion and gnashing of teeth
21
Can the chat interface also offer us the user's profile from the chat room's site?
18
What is the point of the “Parent User” in Chat?
107
Please provide moderators with better tools for moderating users in chat
32
Don't extend suspensions from the parent site to chat
323
Toward a philosophy of Chat
6
Let's have better idea on how to get rid of the point of parent user in chat
11
Cannot login to chat.meta.stackexchange.com; server error when trying to access chat homepage