Recently New Feature: real time updates to questions, answers, and inbox was implemented. With this feature the amount of questions with new activity is shown in parenthesis at the beginning of the page title, e.g.

means that MSO has two questions with new activity since the user last viewed it.

As noted by Kip this feature is unrelated to inbox updates. Here is an example to illustrate this: 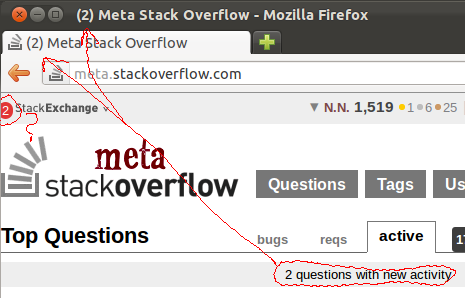 Even though there are two inbox messages in this screenshot this is not reflected by the page title. The page title is currently only sensitive to questions with new activity.

I am not sure what format is best for showing this. For chat * in the page title is used to show that there are messages directed at you which is similar in meaning to inbox updates. However, * if is placed after the number in parenthesis to denote inbox updates there might be confusion as there is no connection between the number in parenthesis and * like in chat. Thus, one might prefer another format such as one of the following (all are meant to reflect the status of the screenshot above):

For the alternatives without an explicit hint of which number refers to what it might be best to place the number for questions with new activity first as it will in most cases be greater. This will to a greater degree avoid combinations such as "(0/2)" which may be confused zero of two.

A disadvantage of the suggested feature is that it might be experienced as verbose. I suggest that it is implemented such that it is as unobtrusive as possible while still being informative. Think of a situation where a user has

Then the sum of the inbox notification in the page titles should be local to sites and not global. The page titles for the tabs above should be something like the following pair:

994
Show all of my question/answers to me even if they are deleted
149
Adding Favorites to the Stack Exchange global inbox
385
Send authors an inbox message if their question is closed
274
The title word filter is one of the worst ideas ever implemented on SO
419
Decision on rejected edits should be displayed as a notification to the editor
510
Implement ```-style (fenced) Markdown code blocks
13
Does the X questions with new activity feature have to change the page title?
87
New Feature: real time updates to questions, answers, and inbox
1250
Don't throw away all votes when a user is deleted