Could the Help be better? (code section)

I think that the help should be the most clear thing. I'm about to suggest an edit to the Code section in the Markdown Help, because:

The most important feature: how to indent multiline code, is not mentioned.

To indent by four spaces a multiline piece of code, select it and click on the {} button, or use the Ctrl+K shortcut.

(I'm not sure if the shortcut bit should be mentioned in the short help.)

I know that a new line is a major change, but I think that it's worth it.

Since the first line of the advanced help reads: "Indent four spaces to create an escaped <pre> <code> block", in my first question I was ending up using the <pre> tag for multiline code, but since there was no highlighting I ended up adding four spaces line by line.

So, I'd really like to have the line suggested above (or something similar) in the advanced help, maybe right after the first example. I don't think this should be a big problem.

Honestly I never used the {} button for multiline code, I discovered the shortcut Ctrl+K by luck in a comment to another question, and used that ever since to edit other questions or my own.

Here's a snapshot of how the markdown help looks: 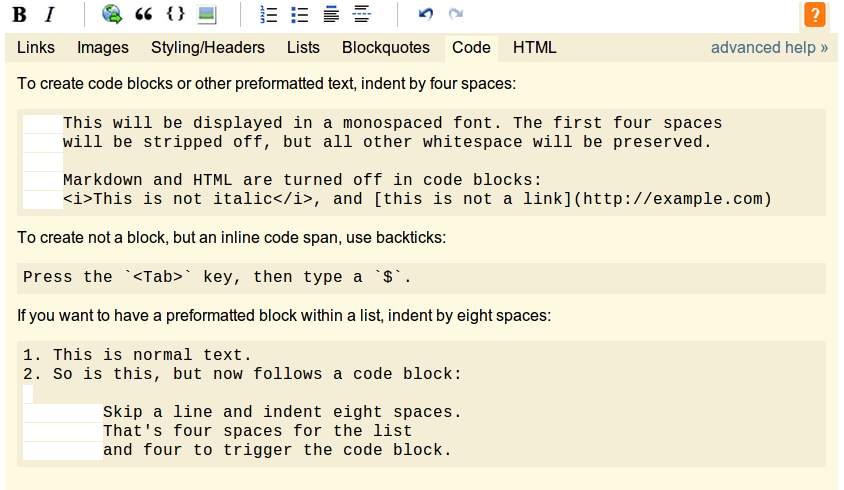 The example I'm referring to is:

As you see the Tab has nothing to do with how to format the code, but since in most editor you can choose between space indentation or tab indentation I think that's misleading to mention it here.

A new user is already facing a lot of new things and may not get that that line is just an example. The only things leading to think that it's an example is the darker background.

I didn't honestly understand the meaning of that line until a couple of days ago, I just put it under "confusing" and skip it every time. I thought that I was probably missing something since English is not my first language or because the $ was somewhat special. (Yes, I did try <Tab> + $ to see if it did something).

Note: I'm aware that there are a couple of other suggestion about the markdown help, but they didn't address the problem this way. Also note that these were problems that I really faced when I was starting out, and I don't think I was the only one.

1813
Could we please be a bit nicer to new users?
503
Implement ```-style (fenced) Markdown code blocks
532
The MIT License – Clarity on Using Code on Stack Overflow and Stack Exchange
2452
Firing mods and forced relicensing: is Stack Exchange still interested in cooperating with the community?
2155
Stack Overflow is doing me ongoing harm; it's time to fix it!
952
Firing Community Managers: Stack Exchange is not interested in cooperating with the community, is it?
577
We're switching to CommonMark
729
New Feature: Table Support