I've never seen a tag synonym created via the voting mechanism and I see evidence that the system isn't working to create synonyms without moderator intervention.

Does anyone have any figures about the number of synonyms that are create by votes as opposed to the number created by moderator fiat across the network?

Related: how many synonyms have been voted down and how many never get any votes at all?

Finally, do the numbers suggest any way the current system can be improved? Should the suggestion system be scrapped altogether?

As a side note, the tag synonym suggestion system on most meta-sites seems unlikely to ever work since voting is different on meta and fewer people participate there. Recently, I noticed a site had both tags and tagging. With a tag score of 2, I couldn't suggest a synonym. Even if I could, there's no chance it would be acted on by other users. So I asked a moderator in chat to fix it. That was a better plan all along, so why do we offer the suggestion system on meta to be a source of false hope?

Clearly, the vote requirement exists to make sure that the synonyms are correct (ie created by one who has knowledge of the topic). To my experience, this system fails, because most synonyms are discovered by coincidence.

The below answer has been brushed up and turned in to its own separate feature-request: Improving Tag Synonyms

This is definitely an issue, as I look at my poor unfrequented tag, and its proposed synonym sitting with a lowly zero votes and a single person with sufficient reputation to actually support it active in the tag:

Answer more [tag:google-visualization] questions so that you can approve this synonym

The existing 3 synonyms I asked for in the Tavern on the Meta (prior to receiving 2500 reputation) and a mod kindly made the change.

I do not believe a standard review queue would work. If it is anything like the Suggested Edits or First Posts queue, then there will be a lot of mindless clicking of accept resulting in a lot more of an issue than an inappropriate edit, or a poor quality post. And that isn't the goal. If anyone can click accept and improve the system, then suggested synonyms shouldn't be suggested at all, and just be accepted straight-up.

So Johnny can retag his old questions with the new tag, get the 5 score, and then suggest the synonym just to meet this arbitrary requirement. Those edits will be entirely useless when the synonym gets approved. Making those edits to his old posts will not improve his understanding of the tags in the slightest and will simply add another hoop for him to leap through.

Alternatively, he could suggest that puroguramu-gengo is actually a synonym of programming-language, but this is definitely not actually true. But at least it could be proposed! And there would be more people able to actually accept it because it is the existing tag with more people paying attention to it. But this is not a solution, it is a problem masquerading as a solution due to it being a practical alternative.

Right now you have to visit the tag synonyms page to see that there is a synonym request, and to vote to approve it. Nobody does that which is why these things never get approved. Instead we should take a two-tier approach to getting users in that tag to notice the suggestion:

Giving users who have the tag favorited will give them an opportunity to click the notification and vote. This is an incredibly non-intrusive way to let people know about tags they have already stated they care about, and potential ways to improve them.

People browsing the tag who meet the criteria to vote could just have a nice banner saying something like:

[User] proposed that programming-language is a synonym of this tag. What do you think? [Yes/No]. For more details see [Link to Synonym Page] (X)

You can raise the bar for how many votes it takes to account that some people won't think in depth, users can ignore it and it won't come back, and it will only target people who are currently interested in the tag and can do something about it. Improvement becomes easier while minimizing the hassle to the user.

Instead of this dull suggestion box:

Here are the results for the top 11 Stack Exchange sites (by question count):

I think the high rate of approval by mods is because folks go straight to meta with their synonyms, perceiving that their proposal will otherwise languish in the proposed tag synonyms list. It has certainly been my experience that tag synonyms languish in review, and jmac estimated that on average pending synonyms have been around for nearly half a year. Why not go straight to the mods if you have to wait half a year or more for approval?

I see two hypotheses for why people don't vote on tag synonyms -- they either don't have a high enough answer score in the tag or they do but still choose not to vote for any number of reasons (UI makes it hard to find the voting page, voting is not properly incentivized by badges, etc.). To explore the degree to which these two factors play a role, I've broken down the number of users able to vote on each of the 612 target tags for the 750 current pending tag synonyms on Stack Overflow (note the log scale on the x-axis): 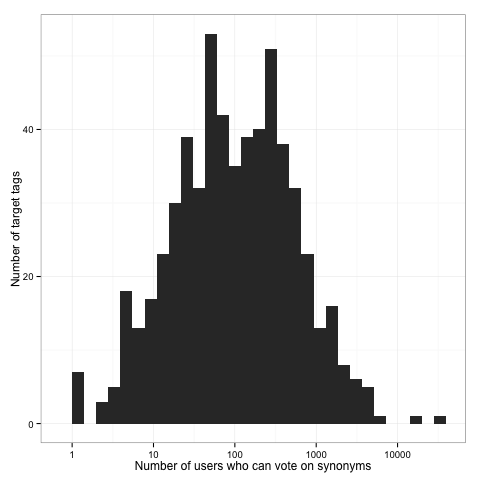 The fact that there are 750 pending tag synonyms on Stack Overflow and that 97% of the synonym approvals on the next 10 highest ranked Stack Exchange sites (by number of questions) are done by mods suggests that the tag synonym voting system leaves much to be desired. I think the least controversial way to deal with the issue would be to get more eligible voters to actually vote on synonyms. Many good proposals already exist on meta for doing this:

Within the Stack Exchange Data Explorer, I used the following query to break down tag synonyms by type:

I got the breakdown of pending flags on Stack Overflow with:

To get information on the number of folks who can vote on each target tag, I used:

Not the answer you're looking for? Browse other questions tagged discussion tag-synonyms .

65
Magic wand time - what does your community need?
111
Improving Tag Synonyms
44
Give Tag synonyms their own review queue
73
We should have a notification system for when users suggest tag synonyms
37
Badge for voting tag synonyms?
44
Tag synonyms: show suggestions to people who can vote
25
A pox upon small sites: the thing that prevents you from creating plural or hyphenated versions of tags
16
Who decides whether a tag gets cleaned up, and how?
14
Count related tags fractionally when determining eligibility for voting on synonyms
11
Remove tag score requirement for suggesting synonyms
See more linked questions

2
Flag synonym suggestion for moderator
200
Can we allow 7.5K users to suggest tag synonyms without a score of 5 in the tag?
258
A real solution to ambiguous tags
15
Remove the tag synonym suggestions entirely
111
Improving Tag Synonyms
2502
Firing mods and forced relicensing: is Stack Exchange still interested in cooperating with the community?