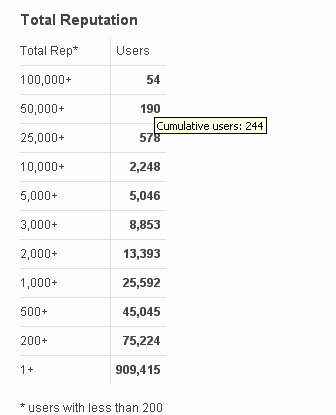 What are these numbers supposed to mean? At first glance I thought it meant that 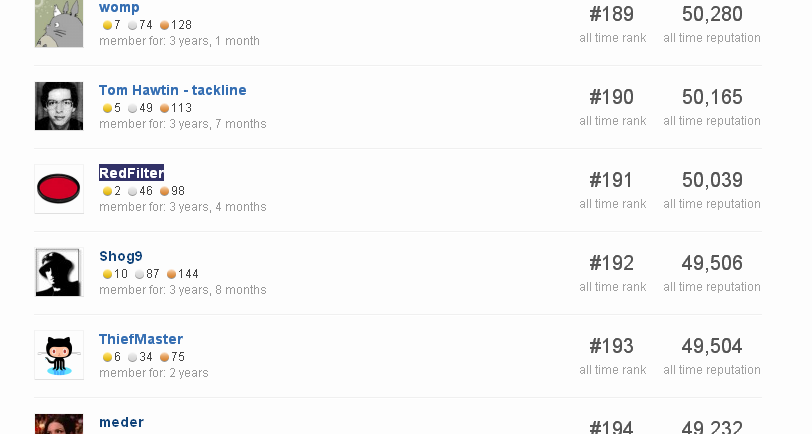 Ingoring the possibility that the calculation of rank and the counts were against slightly different datasets due to caching issues, I don't understand what the 244 is supposed to represent.

Leagues code was majorly refactored in early March (it's now exactly accurate in theory, whereas before, it was always slightly off).

In the process, I inadvertently changed the behavior of the "Reputation Change" and "Total Reputation" sidebar stats modules. Before, "50,000+" corresponded to x >= 50k && x < 100k, whereas now, as you noticed, it corresponds to just x >= 50k. Consequently, the tooltips are meaningless and wrong.

Even though I introduced the new behavior by accident, I think I like it more. So, I removed the tooltips. Thanks for the report.

Not the answer you're looking for? Browse other questions tagged bug status-completed reputation-leagues .

0
Is an anonymous user a user at all?
8
Why the discrepancy in "earned" vs. "actual" days counted in rep cap?
11
Why doesn't "Top n % this year" ever appear?
9
Show accumulated rep over a sliding fixed-size time-frame
121
The Terms of Service prohibit editing other users' content
16
Where's my epic badge?
17
"You must have 1 reputation to participate on meta"