Stack Overflow should have smileys and friend groups

I think Stack Overflow is the most awesome site for programmers on the net. It has all the features one could expect from a programming forum.

But there are several features that I miss. In particular I think the discussions and posts are just plain text, which looks boring.

Apart from superhuman programmers who think boring is scientific, there are also people like me on this site who never even miss a chance to add smileys into source code.

Also, I think there should be an "Add as Friend" feature.

Right now I communicate with people that I know by posting comments in their answers so that they get notified and read it. How should I track people whose questions I find interesting? Or those whom I know can answer my question in the best way?

Does anyone else think that SO could be twice as awesome with smileys & friend groups?

You are mistaking SO for a social network or forum.

It is a Q&A website for professional and hobbyist programmers. 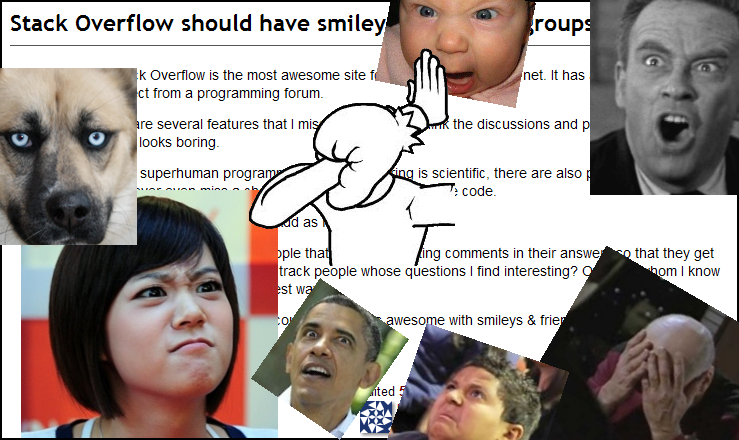 Not me - I consider the lack of friends and (especially) smileys as a feature, not a defect.

I'd ask you to remove those smileys from your source code if I saw them in a code review. I guess I'm one of those boring people you're referring to. Smileys don't increase my interest in a person much.

Smileys in source code is not making you interesting at all.

I am the person who chooses to answer those questions where I can help others or it's an interesting question to solve.

But I will never answer a silly question which has smilies on it; I will probably edit them out.

Also, I think there should be an "Add as Friend" feature.

If they turn SO into another Facebook, I'm leaving!!

The only benefit of follow / friends I can see is that it would make it easier for me to watch for new questions from colleagues' accounts: that way I can put my SO time-wasting to productive use for our company by trying to help them out. (And make sure they never get more rep than me :-) )

But I think that's a fairly niche use case, and I could bash out something to do that using the API anyway.

If any of language is giving support for smiley while you are coding, SO should give it.

if you write :) in any language it will not turn to smiley in your IDE, when IDE will give that support, stackoverflow should think about it.

As soon as there is no IDE with this kind of support, your question doesn't seems exist.

one more point is that, it is professional site not for flirting or making friends, if you realy want to do that there are lot many options available.

For smiley, it is already possible using Unicode characters !

I'm very surprised that this works.

The code used is

I'm 58 year old (in 2020) and I begin using smiley because it allow me to express something that is not possible using little word. A text can be interpreted in distinct manner; using smiley can allow reader to understand my emotion and to have a better understanding of what I'am writing. It is a plus.

I'm a scientific and I regret to see how academic paper are now written. They are unreadable without fun and emotion. The formatting is more important than the content. I don't know if these articles has been written by an human or a robot !

Not the answer you're looking for? Browse other questions tagged discussion feature-request stack-overflow social-networking .

-32
Should smilies be turned into images in questions and answers?
-155
Don't close questions where the user has requested that it not be closed
31
Do we have a policy on smileys? :)
30
Does it make sense to have a negative rep cap for Meta posts?
3
Is a feature request a question?
3
Background on a deleted answer is partially white on mobile theme
0
Why a question is not deleted rather than closed after being determined as unhelpful

1054
Should 'Hi', 'thanks', taglines, and salutations be removed from posts?
723
Six simple tips to get Stack Overflow reputation fast
533
The MIT License – Clarity on Using Code on Stack Overflow and Stack Exchange
826
Net Neutrality and Stack Overflow / Stack Exchange
2441
Firing mods and forced relicensing: is Stack Exchange still interested in cooperating with the community?
2135
Stack Overflow is doing me ongoing harm; it's time to fix it!
570
Change in roles for Jon Ericson (leaving SE)
551
The company’s commitment to rebuilding the relationship with you, our community