Ask Question
Asked 7 years, 9 months ago
Active 6 years, 5 months ago
Viewed 183 times
6
Closed. This question is off-topic. It is not currently accepting answers.

I hope this isn't a duplicate. Similar questions that I found are over a year old.

I have seen cases where shortly after an upvote (perhaps on an old answer?), the summary in my user activity dropdown shows inconsistent counts: 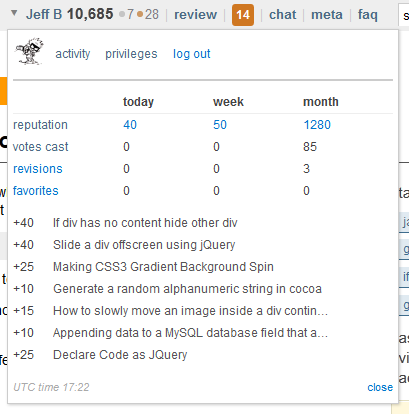 Particularly, the Slid a div offscreen using jQuery answer shows +40, when it was only updated once yesterday. Now, if this is a monthly total for this question, then it is correct, but when I refreshed later I got: 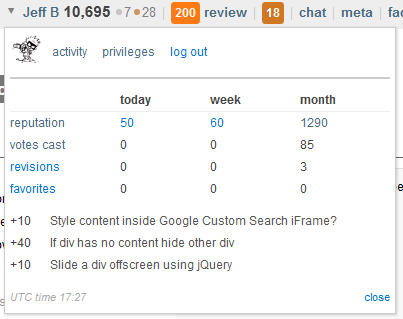 Now it shows +10, and other entries completely disappear.

Here is another example: 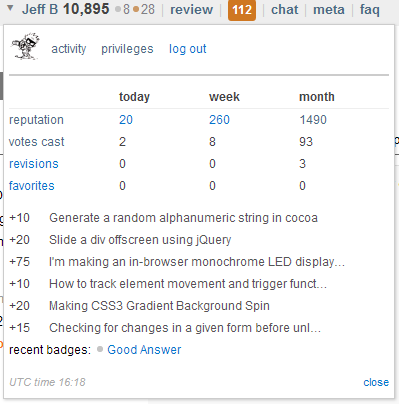 This shows +20 for the same question as before, after I received a single upvote last night. What gives?

You can see from my reputation that there was only a sinle upvote recently: 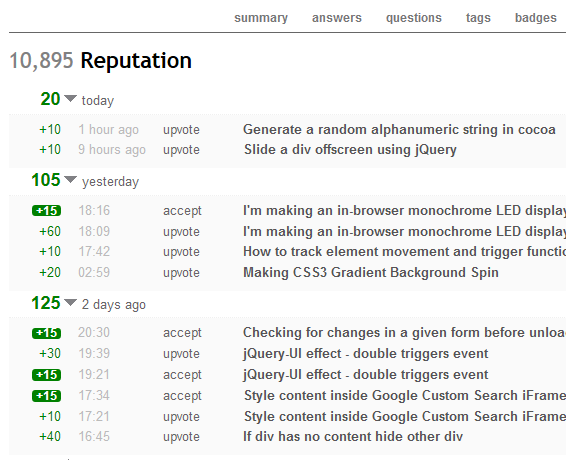 Hover the number with your mouse and you'll see the timeframe it applies to.

(And: hovering is often your friend when you need help on Stack Exchange.)

For some time I thought I understood how it might be supposed to work, but the following merely just confirms what you're seeing. Leaving it here for some more details.

I figured the counts were normally reset at the beginning of the month†. Like on July 1st, there was just one entry in the list while that entry also has an earlier upvote on June 24th:

But also "10 reputation was gained in the last 1 day 23 hours" for a post that is actually much older, but had no earlier upvotes in June:

† One might think it would look in some votes table and calculate the shown values on the fly. But on April 23, 2012 when this question was asked, all counts were about a day old here on Meta. That seems seemed to suggest it's not peeking into the full votes table. And that something was odd on April 23rd.

Looking again Sunday around 20.45 UTC, almost 6 hours after posting the above screen captures, the list was shortened to three items, the first entry moved down in the list, and rather than "40 reputation was gained in the last 23 days" now stated "5 reputation was gained in the last 6 hours 57 minutes". This was not a new vote (and the previous screen shots were less than 6 hours old); it's just that 7 other upvotes are no longer shown in the list...

Not the answer you're looking for? Browse other questions tagged support reputation activity-dropdown .

550
How does “Reputation” work?
723
Six simple tips to get Stack Overflow reputation fast
7
Sudden drop in reputation for no apparent reason in SO
6
New activity dropdown gives incorrect week total for reputation
531
Recent Reputation History Changes
819
What does “user was removed” mean and why did my reputation change because of it?
7
My reputation yesterday didn't hit the daily rep cap, so why didn't I get rep for these upvotes?
3
“Your Communities” dropdown still shows my old rep counts for some sites