I recently participated in a survey that some of you might have noticed on the Stack Overflow banners. 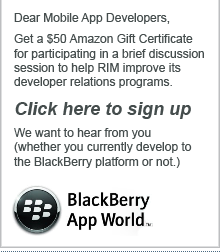 The add promised a $50 gift certificate and after completing the survey, but instead of following though, it just said "thanks". I think that sort of ad is misleading, and I suggest the Stack Overflow moderators remove those kinds of ads from their website. Is very upsetting.

Also, it does not help RIM at all! (EDIT: It does because it is a very cheap way to get useful comments, but I won't ever develop for them after this.)

Can this issue be confirmed?

Thanks for bringing this to our attention. While we were ok with the original offer, we're not ok with them not following through and have pulled the ads for now. We'll let them know this is unacceptable.

We looked into this some more on our end, and found that the landing page changed yesterday. Before that it was http://www.ppsg.us/mobile-developer-discussion-session-registration.html which is in line with the ad. We haven't yet spoken to the advertiser so don't know why they made the change without changing the creative. When we speak to them we'll also ask about the process through which they will reward people that participated in the discussion.

We've spoken to the advertiser and have received the following clarification: Anyone that signed up through the original landing page will be contacted to participate in a discussion. As part of that process you will be asked to also fill out a short survey. The discussion itself will take about 45 minutes. So far 30 people have participated in the discussions, invitations to everyone else will go out in the next two weeks. Incentives for those that have participated will go out this week or early next week, and those that will participate will receive their incentive within a number of weeks of participating.

If you filled out the survey following the new link, which did not offer a way to sign up to participate in the discussion, and you would like to do so, email us at ads dot stackoverflow dot com and we will pass your info along.

Having verified all this, we think the offer (whether you want to take them up on it or not, much like any other advertisement) checks out as long as the old landing page is used. As such we've decided to reactivate the campaign, using the original landing page, and let it run its course.

Yes, I had the same experience, I joined it before 2-3 weeks. I got confirmation email from them and then proceeds to some more registration for survey. But still there is not rewards from their side like how they are going to pay or when they are going to pay. I think that advertisement is just for get visits of BlackBerry Sites Pages. They looks like fake.

Not the answer you're looking for? Browse other questions tagged support status-completed advertising .

291
Do I have to worry about copyright issues for code posted on Stack Overflow?
255
Is Stack Exchange / Stack Overflow available for private or internal use?
225
Why doesn't the Stack Overflow team fix the Firesheep style cookie theft?
265
How can I insert my Stack Overflow rating into LinkedIn?
250
The homework tag is now officially deprecated
1068
Why is Stack Overflow trying to start audio?
215
Deprecating our mobile views