On crypto.SE I was recently greeted with the message:

However, when I clicked the "profile" link in the message, I was sent to a page that listed a bunch of badges, but not Enthusiast. (It's pretty easy to tell, since Enthusiast is a silver badge, and all my previous badges were bronze.) I even managed to grab a screenshot (click to enlarge): 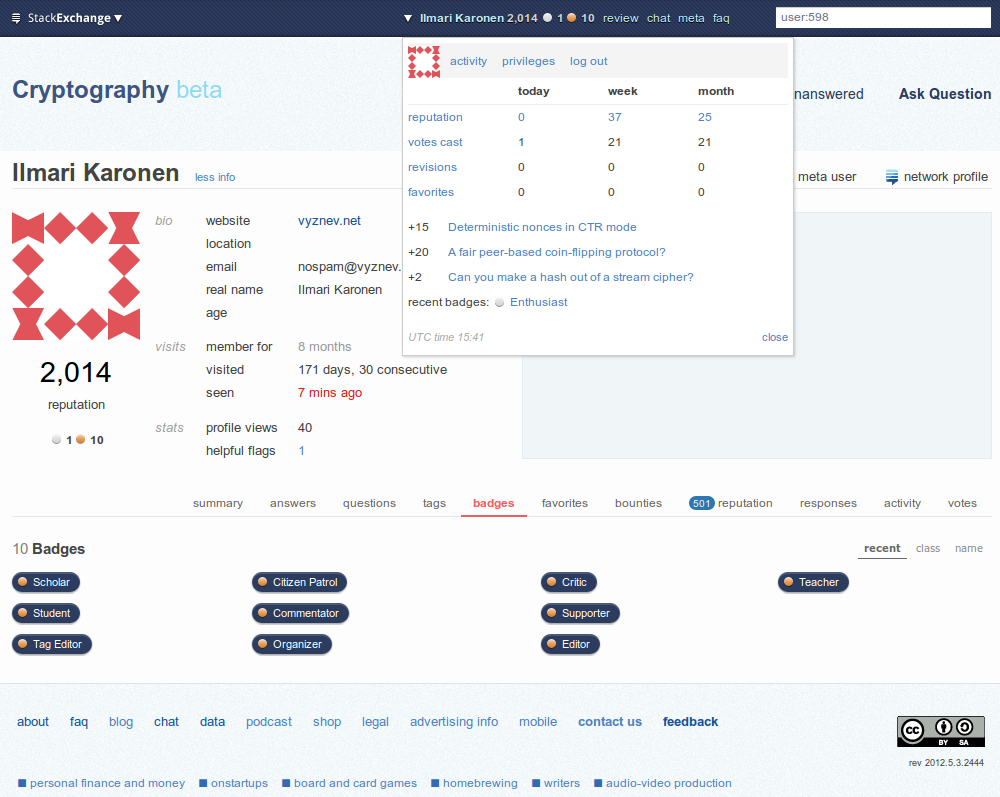 I know this is kind of a minor bug, but still, it amounts to the user interface behaving in an unexpected an inconsistent way. I thought I should at least bring it up here, so that the devs will be aware of it. Hopefully, there will be some really simple way to fix it.

Edit: As I kind of expected, the problem has fix itself while I was posting this, and the profile page is now showing the Enthusiast badge along with the rest of them. However, I'm pretty sure this is not the first time this has happened to me, so the time lag between the badge notification and the profile page updating itself seems to be a recurrent issue. (I suspect it wouldn't be quite so noticeable if the notification message didn't link directly to that profile page...)

Edit 2: It looks like this is a regression from this fix a few months ago, which changed the link in the notification message to point to the "badges" tab instead of the "activity" tab.

Basically, there seem to be two profile pages that both show your badges in descending order by time:

I'd like to suggest that the link in the notification message be changed to point to the latter instead of the former.

(It used to point to the ?tab=activity page, but without the &sort=badges bit, which meant that users who had previously selected an activity filter other than "all" or "badges" were taken to a page showing no badges at all. That's what the previous change, which accidentally introduced this delay issue, fixed.)

I'd like to suggest that the link in the notification message be changed to point to the latter instead of the former.

However, there's nothing preventing a specific clear a user's badge cache when a badge is awarded...which will happen starting with the next build. When a badge is granted, it'll instantly show up in your badges tab.

In the grand scheme of things, badge awards are rare...so why not have them up to date?

This should happen any time you get a badge. Your badges list on your profile is cached. It usually takes up to a minute before they will actually appear there. However, it will be instantly shown on the main /badges page once you receive it.

Not the answer you're looking for? Browse other questions tagged bug status-completed badges profile-page notifications .

134
Find out which question/answer awarded you the badge
8
The link to the user profile shown in the message about a gained badge doesn't take to the right tab in the profile
417
Decision on rejected edits should be displayed as a notification to the editor
131
Profile Page Makeover, Part 3: the Prototype returns
41
Badge Notification Repeats
455
Employee profiles are now marked with a “Staff” indicator