Should tag synonyms be automatically retagged to the master tag?

As as result of https://meta.stackexchange.com/questions/128315/the-great-stack-overflow-tag-question-cleanup-of-2012, a lot of questions were being retagged. I'll focus on the assembly tag, but I suppose the problem applies to other tags as well.

However it's been well over 24 hours and assembly and assembly-language have not been merged. 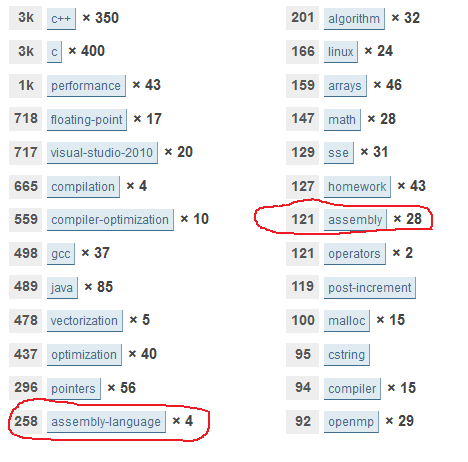 Here's a few bigger examples that were retagged assembly -> assembly-language:

There's a lot more of them. But they're hard to find since searches for assembly-language redirects to assembly.

How should we handle this situation? Do we manually find all the questions tagged assembly-language and retag them back to assembly?

Or is there some other (possibly moderator/dev-only) process that I'm not aware of? Or have I simply not waited long enough?

Moderators can already merge tags, so you just need to bring this to the attention of a mod and request that they merge the tags.

The merge isn't easily reversible, so it is unlikely that this tool will be automated or made available to non-moderators.

Not the answer you're looking for? Browse other questions tagged discussion feature-request tags tag-synonyms .

183
Can we allow 7.5K users to suggest tag synonyms without a score of 5 in the tag?
6
Confusion over assembly tag
4
The top tags in my profile do not reflect synonym changes
1
Tag synonyms do not remap on existing questions

148
Could the tagging system be enhanced to support tag synonyms?
888
Why aren't people voting for questions?
183
Can we allow 7.5K users to suggest tag synonyms without a score of 5 in the tag?
250
The homework tag is now officially deprecated
103
Improving Tag Synonyms
418
Goodbye and thank you, Jaydles!
2394
Firing mods and forced relicensing: is Stack Exchange still interested in cooperating with the community?