Meta sites, with the exception of this very site, have "not a real question" as closing reason. 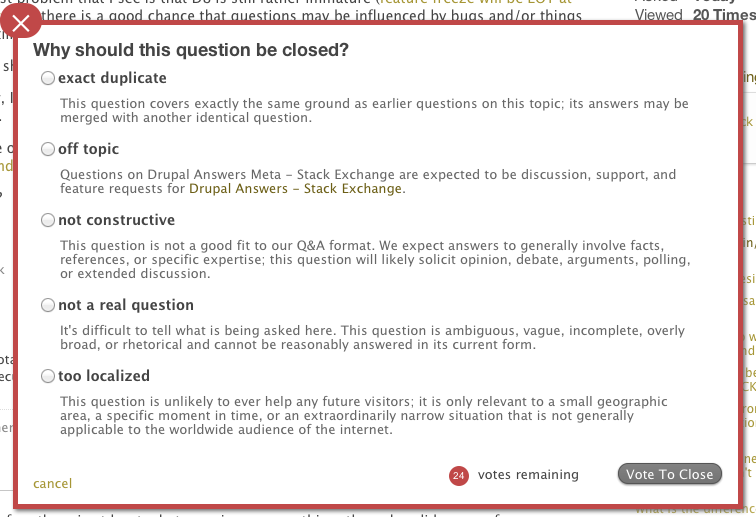 May this closing reason be removed from the other meta sites too?

Meta sites accept feature requests, and bug reports, both of them are not technically questions. The other closing reasons should be enough, on meta sites.

I very much disagree with this request. In fact, I'd like to see NARQ back here on Meta.SO.

Meta sites accept feature requests, and bug reports, both of them are not technically questions. The other closing reasons should be enough, on meta sites.

The NARQ close reason obviously does not apply to bug reports and feature requests. And there's little risk of it getting used inappropriately, since only trusted users have the power to close questions anyway. And if there were a case where a bug report or feature request was inappropriately closed by some 3k+ rep users as NARQ, a moderator could easily step in and fix the problem.

It's difficult to tell what is being asked here. This question is ambiguous, vague, incomplete, overly broad, or rhetorical and cannot be reasonably answered in its current form.

Please don't try and tell me you haven't seen Meta questions where that adequately describes the reason behind a closure.

Because "not a real question" is barely used, on a meta sites, differently from the other closing reasons.

I disagree. I either use it relatively often on the SE 2.0 Meta sites, or frequently wish I could use it here.

On this meta site, that closing reason has been removed, and it doesn't seem "not real questions" are still open.

That's because other close reasons are getting abused to close these questions; in particular, the "not constructive" reason. It's also because these questions get closed and deleted extremely quickly here on Meta.SO. That's not necessarily the case on SE 2.0 Meta sites. Just because you aren't seeing evidence of these questions does not mean that they do not exist.

Not the answer you're looking for? Browse other questions tagged feature-request close-reasons per-site-meta .

21
“Not a real question” on Meta?
4
Change the “Not Constructive” close reason to some variation of “not a good fit for SE” so it matches its description?
1
For some users, StackOverflow's review page “soliciting feedback” link sends to a page with no questions
-7
Re-add “not a real question” as closing reason for meta.stackoverflow.com

315
Distinguish close votes by reason
371
Send authors an inbox message if their question is closed
1175
Don't throw away all votes when a user is deleted
232
Replace accept rate with citizenship level
179
Don't lock votes on Meta sites
257
Closing changes: [on hold], unclear, too broad, opinion-based, off-topic reasons, bye-bye to Too Localized
431
Should Stack Exchange in general be awarding “A”s for Effort?