Confused as to why a suggestion was rejected

I don't care about the measly 2 points I didn't get. I only care about the lesson and reason behind the decision so I won't repeat the mistake... so that eventually, when I have enough reputation/maturity/trust to edit without supervision, I'd like to not piss off the rest of the community.

Now, I've read the rules on post Edits and I believe I understand them (or at least the spirit behind those rules). I've also perused similar questions/discussions here on Meta.

I believe I was adding some useful formatting which aided in accurately understanding the question at hand without requiring multiple read-throughs:

The fact that it was the Community♦ user brings me to believe my error should be obvious but I simply don't get it. There's no message. Nothing! I simple, automated "F#$% off! You don't know how to edit!" (actually it just says Rejected but without any reasons to explain, it might aswell be written that)

I would like to be able to serve the community better so... please explain to me which law I've obviously broken. If I can't properly serve this community then it's a moot point for me to stick around isn't it.

discussion suggested-edits rejection-reasons
Share
Improve this question
edited May 23 '17 at 12:35

It looks like Tanner Ewing edited it at about the same time your suggested edit came along, and potentially marked it as Unhelpful[See Comments], and thus it was rejected by Community. 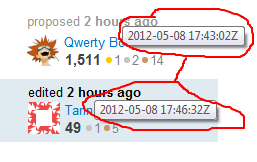 I don't think you did anything wrong, and it appears Tanner (inadvertently) kept most of your changes and added some additional information.

Not the answer you're looking for? Browse other questions tagged discussion suggested-edits rejection-reasons .

4
Should the Rejected Edit reason be shown to the Editor?
31
What are the rejection reasons for suggested edits?
34
Why does the Community User reject / approve edits?
13
What caused Community ♦ to reject this particular edit suggestion?
29
Odd scenario which doesn't give a Rejected reason and should

907
Why aren't people voting for questions?
586
Exit strategies for “chameleon questions”
100
Why can't I suggest edits on SE meta sites?
417
Decision on rejected edits should be displayed as a notification to the editor
106
Why “What Stack Overflow is Not” was deleted
2
Two edit suggestions rejected, then one “stolen”. Please, verify
353
Let's take a look at the interaction between staff and the “power users” of the network
279
An open letter on the state of curation and moderation
299
An update on my resignation notice