What should I do if a user posts sensitive information as part of a question or answer?

I've observed several incidents where users inadvertently posted detailed, sensitive information. For example, a Server Fault user who posted a question with working login credentials to his actual production server, or the Stack Overflow user who posted actual medical records as example data for his question.

What should be the procedure for handling such cases?

First, edit out the sensitive information.

This minimizes the damage by reducing the number of people who will see it casually.

Ideally, you'll have full edit privileges and can do this quickly. If you find yourself having to suggest an edit, then make sure you edit out all sensitive information - otherwise, your edit just blocks a more thorough editor and leaves traces in the suggested edit history.

When you submit your edit, point out the issue you're correcting in the edit summary, but don't initially leave a comment as it will draw attention to the redacted information.

Second, flag for moderator attention with the "in need of moderator intervention" flag, explaining why the sensitive information should be removed

Often, simply editing is enough, but in cases where someone could suffer serious consequences if the information remains visible on the web (keys that can't be changed, 3rd-party medical information, etc.), you'll want to make sure it's thoroughly purged. Moderators can redact information from prior revisions to remove all traces of such information from both the post and its history; flagging will alert them to the nature of the problem.

If you don't have flag privileges (normally set at 15 reputation on launched sites), you should contact the Community Team using the "Contact" form - linked in the footer of every page on the site. This goes to Stack Exchange employees and no other users (including moderators) would be notified.

For moderators handling these flags

If the information appears dangerous, and especially if it involves someone who was not responsible for posting it, use the "redact" function on every revision which contains the information. Normally, this will be every revision listed in the revision history, however if it has been already edited out by someone (perhaps following the instructions above) it will tend to include only revisions up to but not including the latest. 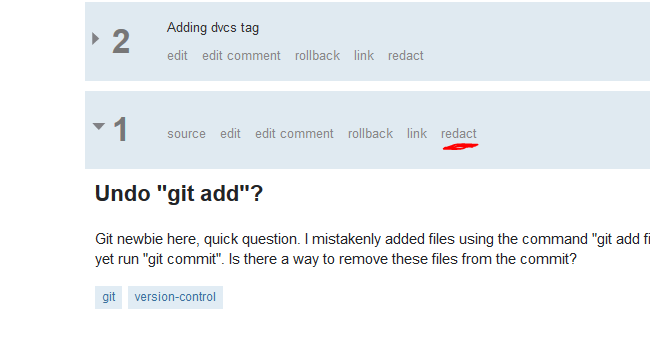 Once you've redacted these, another moderator will need to approve your redactions (they can be found via the flag queue). This is done to avoid frivolous or misguided use of the tool to hide benign edits. When approving another moderator's redactions, have a talk with them if they do not appear to be warranted.

If you can't quickly redact problematic information in a given post, then delete it until you can.

Redactions by staff members who are moderators don't need approval by a second moderator.

18
Questions with proprietary or confidential information
18
How to permanently delete questions that contain sensitive information
5
Removing someone's private information and edit history to protect them
10
I need to remove a question with sensitive data?
10
User posted their password!
8
How to handle personal information posted by a user on Stack Overflow?
4
What can I do if I post confidential information?
7
Flagged question as a security issue
3
Is it possible to delete sensitive info fully on SE, even from revision history?
3
Of people posting Email addresses in Stack Overflow Posts
See more linked questions

1044
What are "Community Wiki" posts?
291
Stack Exchange Glossary - Dictionary of Commonly-Used Terms
148
Limits for self-promotion in answers
487
Is cross-posting a question on multiple Stack Exchange sites permitted if the question is on-topic for each site?
305
How do suggested edits work?
839
What does "user was removed" mean and why did my reputation change because of it?
425
Which computer science / programming Stack Exchange sites do I post on?
287
Under what circumstances will Stack Exchange, Inc. share private/sensitive information with the press?
993
Firing Community Managers: Stack Exchange is not interested in cooperating with the community, is it?