Unable to perform actions such as deleting comments

The last couple days I've been largely unable to delete comments and perform some other actions on Music. Occasionally it works after a fresh page load but it seems to be completely at random.

I'd guess that the things that don't work are related somehow, relying on some sort of AJAX mechanism that's broken? Obviously I have no idea what's going on behind the scenes.

This happens in both Chrome 19 and IE8 on Windows 7 x64. The Android site doesn't seem to be affected right now, but I have encountered this problem previously both on Android and Music (it resolved itself after a few days) so I thought I should bring this to MSO.

I have diffed the page source between a page when it was working and when it was not, and found no differences other than timestamps. As such I'd assume this is related to an asset like a script, or perhaps something server-side. (Based on jadarnel27's answer I think that is misleading, I don't trust Chrome to have properly showed the source of the actual page it was showing to me.)

jadarnel27 is correct, it was indeed an issue with jTab.

jTab includes a support library called Low Pro for jQuery. Only one of that library's features is actually used, but the other ones are still there. Unfortunately, at least one of those features overwrote a native jQuery method: delegate. That method was added in jQuery 1.4.2, but Low Pro JQ hasn't seen any large activity in four years.

While the "real" and the lowpro delegate do more or less the same thing, they're not identical. But because the lowpro delegate had injected itself deep into jQuery's guts, it was called at some point during the comment click handler creation, and it mangled the function arguments around. I have removed all but the actually used features of lowpro from the jTab file, so this is fixed in the next build.

In other words, the harder you refresh, the longer it takes for Chrome to have the jTab file available, and thus the bigger the chance that the click event handlers had already been bound by the time jTab finally arrives and overwrites delegate.

This obviously wouldn't have affected android.se, so whatever happened there was unrelated. Can I assume you haven't been seeing that anymore?

(Sorry for abusing the answer box here, but I thought this might be helpful in tracking down where the problem lies. I'm using comment votes as an example, it should apply to all the other elements Matthew Read mentioned)

When I load a Music.SE question for the first time (and comment voting is not working), I can look in Chrome dev tools and see this "click" event attached to the "Comment upvote" button (really an <a> element): 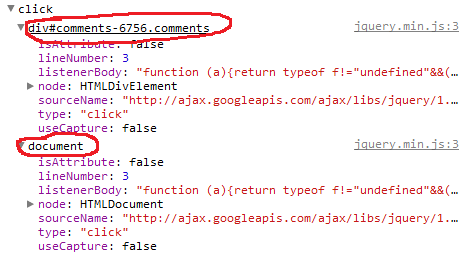 On Stack Overflow (where comment votes always work), it looks like the second example every time a page loads (it never looks like that first example).

339
Inline links in comments
184
Subscribing to questions and comments that don't belong to you
421
Add data.SE style “magic links” to comments
2
Selecting specific revision while editing on mobile has no effect
192
Allow moderators to reply to a flag
2
show n more comments does not change text when clicked
108
Did You Know… that 10k users can see deleted comments?
6
On user comments history page, the “Select all” checkbox does not work after performing a search
578
We're switching to CommonMark