Can I please be trusted to not to script a bot that dumps an endless stream of spam messages into the chat?

I will have been at Stack Overflow for three years this summer. Although I have mostly stopped answering questions long ago, I still rake in the occasional piece of rep, and have thus amassed >60k, most of it in this one tag, where, in over a year of me slacking, they still haven't managed to push me off the list of the top 20 users. (Suckers, the bunch of them!) I am a trusted user thrice over, a mere step below a moderator, I can edit just about anything on the site, and with the click of my forefinger cast a third of the necessary power to atomize (or rematerialize) any question or answer given by anyone.

I have been in the chat since >2.5 years. I am one of the owners of one of the most popular rooms, where all of the most frequent users are >10k (half of them 50k or above), and I have my share in the room having developed its own FAQ and wiki, and a whole set of memes and idiosyncrasies.

Yet, when I need to split a message in the chat because it gets too long (I know you wouldn't have guessed, but I am a bit long-winded sometimes), cut out the second half, hit enter, paste it back, and hit enter again, the chat server greets me with "you can try this action in ... seconds", and requires me to grab the mouse to click on "retry", by which time someone else will have sneaked in a dumb technical message, interrupting my beautifully crafted, witty, universally applicable, and most philosophic statement—very likely with some stupid template meta-programming bullshit.

Incredible as it may seem to the praised creators of the chat (Long may they live!), but I really resent that.

What is that "feature" good for for, actually? Do you think it likely that, after almost three years on Stack Overflow, I am about to script up a bot that dumps an endless stream of spam into the chat? Or do you really think I can type fast enough to prevent everyone else from slipping a message in once in a while, thereby bringing the chat server to a grinding halt under the sheer weight of my voluptuously opulent thoughts?

You know, I kind of can see the point in not letting everyone roam totally freely when you have almost 7k users who can flood the chat with anything they want to (until they are flagged and caught, that is). But the <1000 trusted users? Really, where is the point in preventing them from committing several chat messages in under one second once in a while?

Note: Since this is threatening to go the way Konrad's request went and become buried under tons of Is-it-Friday-yet-in-Iceland postings and the proverbial unicorn wankery, I removed discussion and added feature-request instead. To be absolutely clear, here is my feature request spelled out plainly:

And I would love to see that status-planned tag on this question rather soon.

Like the limit of links for first-posters on Skeptics, this is an entirely made-up problem.

Even if a benefit existed because this were a real problem (and in my opinion nobody has made this plausible), it is massively overshadowed by the downsides.

Here’s a heretical thought: how about switching off the flood control completely and see if the world ends?

I know what my prediction is. Spoiler: it is less dramatic than Nostradamus’.

Yeah, this annoys me too.

When I'm in the grip of a caffeine-fueled rant, callously ignoring anyone who tries to get a word in edgewise, I like to slap the enter key at regular intervals so as to let folks know I'm still typing. 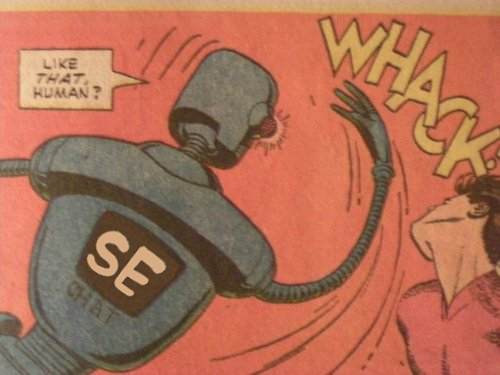 Forget spam - disabling the rate-limiter entirely makes griefing too easy. But it would be nice to be able to send two or three reasonably short messages back-to-back without having to wait.

We have done some extra work on this. The overall rates haven't changed, but - we now let you post (or edit) once (in any sequence) before the system gets all prissy. This means you can do a quick 2-liner, or a ninja edit, without it complaining. This seems to cover a majority of the cases it is seen, but it still applies an overall rate throttle - so while you can do a quick 2-liner, you still can't suddenly post 40 messages in 10 seconds.

The idea behind this to avoid mass spamming if a trusted account is taken over by a spammer.

However, I'd also love to see this annoying feature go away. I'm sure there are already other measures in place to detect abusive behaviour.

It seems to me, your gripe is not with the chat system stopping you from 'spamming' messages to quickley, but from your longer posts being shrunk down with a 'show full text' link at the bottom.

I personally think that current system is just fine. Normal flow of conversation is not halted by the anti-spam filter, if we can accept calling it that and long posts are shrunk so that they do not get in the way.

A long message will break up the chat, as it very quickly pushs messages of the screen. The 'folding' of it prevents this, to a point, but allows users who actually want to read your entire rant post can.

I think the ideal solution, is to allow users to configure post folding. Thus you would be able to disable it for your self, without forcing us to have look at your big fat wall of text.

I agree with the anit-spam filter at low levels, if anything, it should have an even longer time out. It helps force people to think a bit more rather then use chat as a stream of conciousness. But like as people reach higher levels of rep, there is no need throttle them in such a fashion. If some one did decide to go wrong, a ban can be applied easy enough.

So yeah, an unlock of "you can now spam chat, but don't" would be a good idea.

I agree with the anit-spam filter at low levels, if anything, it should have an even longer time out. It helps force people to think a bit more rather then use chat as a stream of conciousness.

I see no reason to presume that high-rep users are magically any less susceptible to this than low-rep users. Rep does not correlate well with ... well, with anything, really.

I would support slackening the rate limiting as it keeps getting me, too. But I don't see a reason to remove it. I realise that the obvious response now is "give me a reason to keep it" and I can't answer that any better than @thecoshman did.

Not the answer you're looking for? Browse other questions tagged feature-request status-review chat .

7
Make the Chat rate-limit less restrictive
5
How do chat cooldowns work?
30
Relax flood control in chat
199
I am not a robot!
94
Can we have a guaranteed pipeline for responses from Stack Exchange?
76
Markdown in chat fails for multi-line messages
19
Disruptive 10k+ user in chat
11
Chat throttling should kick in after the second message
29
Room owners should not be throttled in the Chat systems
4
Remove Human Verification on trusted users
See more linked questions

1226
Encouraging people to explain downvotes
993
Show all of my question/answers to me even if they are deleted
193
Provide a tool for moderators to migrate comments to chat
167
Invite low rep users to participate in chat
168
Add escalation system to chat flags
419
Decision on rejected edits should be displayed as a notification to the editor
1250
Don't throw away all votes when a user is deleted
325
Toward a philosophy of Chat
387
If you're gonna talk Politics, you must respect those who disagree