On Firefox for Android (Fennec), version 12, 13 and 14, the user info on profile page is blanked: 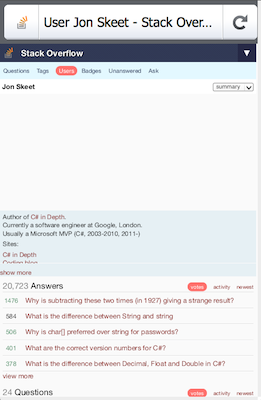 Where is the gentle and smiley Jon's face?

I asked Firefox Q&A thinking about a bug in Fennec, since it displays correctly on other Android browser, but received this answer that indicates it's rather a bug on SO side:

The drop-down is floated within a container that uses 100% of the width of the screen. The next element floats up alongside the rather than dropping down beneath it because that next element doesn't have a specified width or minimum width.

StackOverflow can solve this problem by editing its CSS to include a clearing rule:

Firefox for Android is not a browser we support (first of all, it's still in beta), but since the fix is easy enough and it is indeed unlikely that FF will change this, I've cleared the float for the next build.

Just for the record, that Firefox Help answer says:

This problem has appeared in sites for years, and it seems unlikely that Firefox will change the way it handles floats to work around developers who forget to clear them. (emph. mine)

– I find it pretty audacious to blame web developers for the fact that (as I have criticized before) Firefox decides to ignore this directive in the CSS standard:

If necessary, implementations should clear the said element by placing it below any preceding floats, but may place it adjacent to such floats if there is sufficient space.

– I'd love to know how this "careful weighing" took place in this case.

Not the answer you're looking for? Browse other questions tagged bug status-completed design mobile-web firefox .

101
Prevent posts with links to jsfiddle and no code
131
Profile Page Makeover, Part 3: the Prototype returns
9
Find community text partially obscured in the edit box
6
Site icons are squashed in the newsletters page in the Firefox browser