From the blog post announcing the new notifications tab:

Since notifications aren’t as important as inbox notices, whenever you have unread inbox messages we’ll display the red inbox indicator rather than the gray notification indicator. Of course, once you open the drop down you’ll see that you also have new notifications.

Moderator messages currently fall under the category of "notifications", but I contest that those are far more important than even our regular inbox replies. Since they're reserved for serious issues, it only makes sense that they request immediate attention from those involved.

The ice-blue icon that currently represents notifications is barely visible on the gray Stack Exchange navigation bar. This is mentioned in New "Notification" colour isn't obvious. In fact, I'm noticing that since the introduction of the notifications tab and the incredibly hard to see icon, less than a third of the moderator messages we've sent in the past week have been read on our site.

(I don't know if that's a cause for concern among others because granted, mod messages are also sent as emails to users who have an email address on record so they'll probably receive and read them. But users who for whatever reason don't have associated emails may not end up seeing the messages on site at all, because the notifications aren't obvious.)

Anyway, besides changing the color of the new notification icon, which would be great, can we have moderator messages show up as red like all other inbox replies to the users involved? I suppose it's alright if they show up as regular notifications for other moderators who aren't directly involved in the conversation, but to those who are, they are very important.

Moderator messages should be going into the inbox as of the last build.

Just a historical accident that they were notifications at all. I suppose they were the "more annoying" option at the time, but that was madness clearly.

(I sort of already discussed this with some of you, but it's better posting here since that's unlinkable)

Clubbing them with the red notifications is bad as well. Quite a few times, I miss a red notification when they're drowned out by the others. Mod messages are extremely important, we need to ensure that the user reads it. Emails are prone to being shunted to the spam folder (indeed, the bounty emails are doing just that currently in GMail).

As @TheEstablishment said, they should be in a modal dialog. The old orange bar is OK as well, but a completely different system for mod messages would be better. Something which will have to be clicked, and read through. 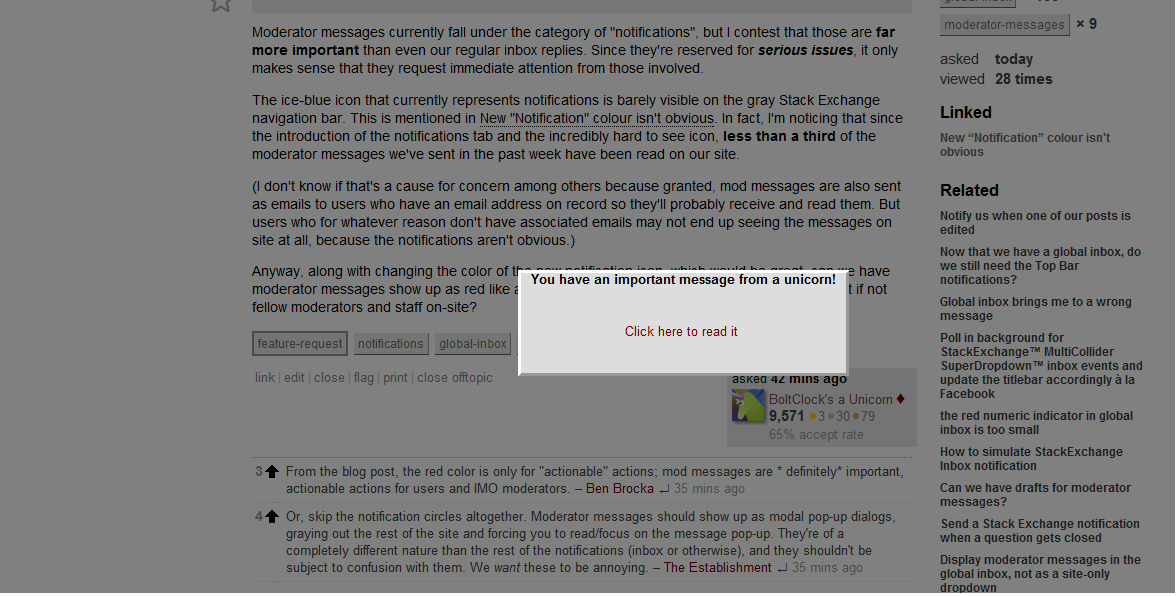 Note the lack of a "close" button.

The link opens the message in the same tab. The user has to acknowledge that it has been read, and only then will the modal stop bugging him/her. On ALL SE sites.

Not the answer you're looking for? Browse other questions tagged feature-request status-completed notifications global-inbox moderator-messages .

992
Show all of my question/answers to me even if they are deleted
148
Adding Favorites to the Stack Exchange global inbox
6
Global inbox email notification gets sent for already-read messages
417
Decision on rejected edits should be displayed as a notification to the editor
127
Feedback request: New top bar and MultiCollider redesign
274
Make moderator messages anonymous
55
What events trigger an inbox notification?
139
"Question closed" notifications experiment results and graduation
48
In the new top bar, the moderator diamond no longer changes color to indicate new inbox messages