Can we get a more efficient way of contacting the team? [duplicate]

Ask Question
Asked 9 years, 6 months ago
Active 9 years, 3 months ago
Viewed 459 times
32
This question already has answers here:
Can we have a moderator only "flag for community team/developer attention" link on posts? (3 answers)
Closed 5 years ago.

Right now there are two options a moderator can contact the team:

Both options are a bit crude, there's no easy way of knowing that a fellow mod has already contacted the team or an easy way to backtrack an issue. Certainly we do get things done, however our current tools and processes get in the way more often than not. What I would like would be a feature that:

I think the current feature that mostly resemble what I have in mind is mod messages, every time a moderator sends a mod message to a user, all moderators and the team are notified, and of course there's a handy list of past messages. The mod team bat signal would be more of an issue tracker than a private communication mechanism though, I don't expect the team to respond in any other way than a status. If there's need for discussion on an issue, well, we always have TL (sigh).

And should not be used for:

One way we could limit the use of the tool would be to only allow specific categories of messages, and nothing else. You know, like a real issue tracker.

1 My ragequit message, don't anyone dare steal that ;)
2 True story. Sort of.

I must admit I like Jeff's proposal, it's unrealistic to expect SE to scale as well as the community does, and I'm all for shiny new toys. However:

So, at least three of my examples (more or less) have already been proposed as separate features, and declined (and I've only searched for 30 seconds). It appears that lobbying for those abilities to be made available to moderators doesn't seem to be an option, after all. Don't get me wrong, we get cool toys all the time, however there are always going to be actions that require SE's intervention.

My examples might not be the best examples, but that's irrelevant, the whole point of this feature request is that since we'll always need to communicate certain issues to the team, can we please do it in a way that's not absolutely braindead?

I've seen some moments where there was some confusion regarding specific requests, both with the moderator and the community team member. One mod made a request twice with no response and had no idea as to the request's status a day or two later because there's no visibility on either side.

For example, was the community member working on the request or did he/she get sidetracked with other priorities? Did the moderator recheck the status of the issue before making the request? Did either party have the most up to date information to know if action was needed on that person's part?

I imagine it can be tough if you're a community team member or a busy moderator to manage a pile of pings in a chat. Thus, we can help bridge that communication gap and improve efficiency, using this feature request or something similar.

I'm not sure about mod messages though, as they're not really intended to be used as a ticketing system. What about Basecamp? Trello? I realize the idea is to reuse as much of the SE tools as possible, but sometimes when you're hammering in a nail, you actually need a hammer.

This strikes me as adding process for the sake of process more than an actual solution to a problem.

I am a big, big fan of the minimum viable process for something to work. Unless you can make a pretty compelling case that stuff is broken -- and I'm not seeing that in your post -- "we just gotta add more process!" is almost always the wrong way to approach the situation in my experience.

If these are indeed coming up a lot on Programmers*, then lobby for those abilities to be made available to moderators so you can get it done without needing any more process.

* which I find a bit strange in and of itself, and suggest digging into why that is before proposing "fixes".

I already asked about this in April and presented 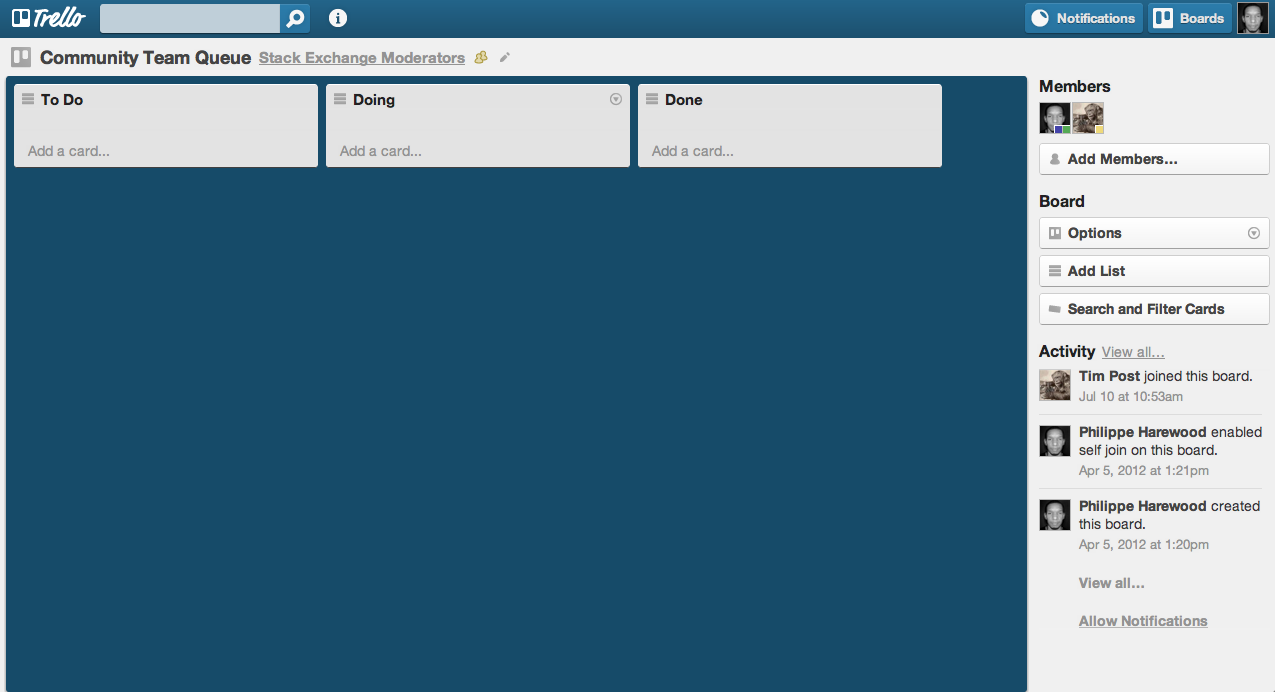 The thing is, this relies on mods actively following up with their requests/issues, which they don't. I'm going to get eyes pointed at me for this but some mods are lazy.

There have been countless times, I have looked in TL to see someone asking about something that was mentioned in the last Chat Cast (which mind you they were there for) or the newsletter or the cheat-sheet. Yes it's TL, for asking questions but the repeated questions were why the cheat sheet was made. I literally watch as a microcosm of Stack Overflow is formed within the TL chat room.

Some mods, don't even know all the links in tools after months of being a mod. Sorry for calling people out but it makes no sense asking for a new toy if some people cannot use the old ones properly.

112
Can we have a moderator only "flag for community team/developer attention" link on posts?
8
Add a contact community tool for Moderators?
41
Give moderators the ability to manage blacklisted tags
19
Flagged suspicious serial upvotes - marked as helful but strange action taken
28
We need better spam detection and blocking tools
8
Is the Stack Exchange team using Trello?
6
Add a moderator status field

854
Allow an edit to notify downvoters: "I think I've fixed the issue now - please check"
970
Show all of my question/answers to me even if they are deleted
225
Why doesn't the Stack Overflow team fix the Firesheep style cookie theft?
139
Can we have drafts for moderator messages?
416
Decision on rejected edits should be displayed as a notification to the editor
505
Implement ```-style (fenced) Markdown code blocks
1238
Don't throw away all votes when a user is deleted
304
Moderators should be able to manually ban users from suggesting edits
275
Make moderator messages anonymous