Do posts have to be in English on Stack Exchange?

Do I have to use English when posting a question, an answer or a comment on a Stack Exchange site?

The Stack Exchange Trilogy has an official policy on non-English questions (please feel free to read the full blog post for more detail):

It is not, nor has it ever been, our goal to be the one place in the world for all programming information in every possible human language.

As long as the question is in salvageable English and makes some modicum of sense, it should be edited and improved like any other post.

Languages by total number of speakers 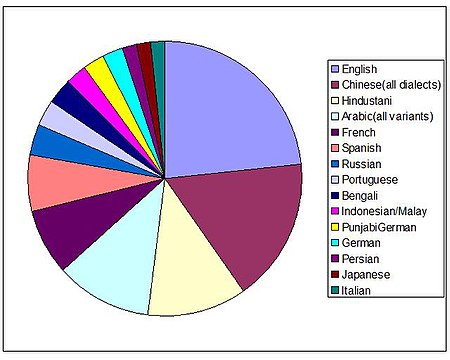 English is as close that we have ever come to a global lingua-franca. It is generally considered the dominant language of science and diplomacy. It is also the most taught second-language by a far, far margin. English is the official language of about 45 nations.

English is everywhere. Some 380 million people speak it as their first language and another 600 million speak it as their second. A billion are learning it, about a third of the world's population is in some sense exposed to it and by 2030, it is predicted almost half of the world will be more or less proficient in it. It is the language of globalization - of international business, politics and diplomacy. It is the language of computers and the Internet. You'll see it on posters in Beijing, you'll hear it in pop songs in Tokyo, you'll read it in official documents in Prague. Deutsche Welle broadcasts in it. Bjork, an Icelander, sings in it. French business schools teach in it. It is the medium of expression in cabinet meetings in Bolivia. English is now the global language. - Oxford Seminars

The number of people who speak English is nowhere near as important as how many people can write it. More specifically, the number of people who use their written language on the Internet can be the single most telling piece of information. The #1 language of the Internet is English, by a wide margin. In the chart below you can see that it is almost three times as prolific as the next language.

Finally, most programming languages are based in English. Their keywords, APIs, and documentation are mostly taken from English words. The number of mainstream languages that have non-English language equivalents are few and far between. With our languages already based in English, it makes sense to continue expanding our knowledge repository without dividing it into various inaccessible fractions.

Are there any exceptions?

Sure! On language-related sites, you are allowed to use those languages in addition to English. They are:

* There's a special site for full-Russian. See below.

Are there any Stack Exchange sites completely in other languages?

Yes. There are a few! While we are currently not accepting any new proposals for future non-English sites, these sites are available for anyone interested in those languages and will always be around:

What should I do if someone else makes a post that is not in English?

If someone makes a non-English post on a site other than one in the above two lists, or in a language different from the site's accepted languages, first, check to see if it's spam. A small portion of wrong-language posts are actually spam, so be sure to check for that.

If it's not spam, vote or flag to close it as "Needs detail or clarity" if it's a question, or flag as "very low quality" if it's an answer.

Should I translate wrong-language posts?

No, it is not necessary to translate wrong-language posts. Machine translations (e.g. Google Translate) can be inaccurate, and even human translations risk distorting the intended meaning of the post. It's up to the author to make sure that their post fits the quality standards of the site; if they don't, it reduces their chance of getting a good answer (in the case of a question) or that their post will be well-received.

23
I think we need a flag for non-English speakers
22
Wat gebeurt er met een vraag die niet in het engels wordt gesteld? / What happens to questions that aren't in English?
5
Overzealous editing out of a single non-English phrase?
6
Is it allowed to use non-English language in comment/answer?
17
Flagging non-English questions
2
Asking and answering questions in Spanish
6
Stack Overflow "standard" language
9
Are there Stack Exchanges in different languages?
6
Flag comment not in English
3
What should we do with posts written in a language different from English?
See more linked questions

525
What HTML tags are allowed on Stack Exchange sites?
768
Which tools and technologies are used to build the Stack Exchange Network?
1044
What are "Community Wiki" posts?
871
The Many Memes of Meta
156
How do you reopen a closed question?
291
Stack Exchange Glossary - Dictionary of Commonly-Used Terms
74
What is Meta Stack Exchange, and how does it work?
799
Recent feature changes to Stack Exchange
993
Firing Community Managers: Stack Exchange is not interested in cooperating with the community, is it?