Can we modify "Ask question" to automatically suggests tags based on your question content.

So instead that user needs to type "team-foundation-server" or "TFS" or "TeamFoundationServer" he will see list of tags auto-populated with ajax which he (or she) can then select and it will be associated with the question. So basically only thing we need is code which will cross-match question content with list of known tags while user is typing and display results in some nice ajax-enabled list/cloud/whatever UI control. This should be separate control for tags suggestions so user still has option to use standard tag list input to type-in tags.

In this case, instead of three (or more) tag variations we would have only one tag for Team-Foundation-Server.

This was completed a while back. You'll see the suggested tag appear as soon as the tag predictor can pull enough from what you've written. A rather silly example (predicted tag circled in red): 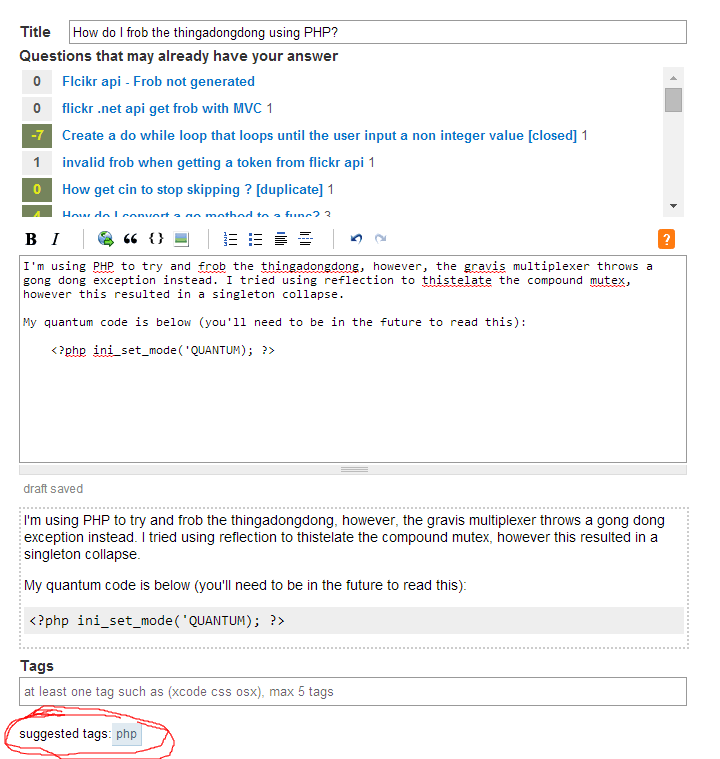 Just give it a few seconds to determine the most appropriate tag(s), and you can click on them to apply them to your question.

Marking status-completed, a bit late, but better late than never :)

Since it already finds questions that match the title, if you expanded the search out to also include the question body, you could then pull the most popular tags from that list of matching questions, that would already be a good starting point.

Otherwise you could possibly set up the keyword/synonym idea on tags and if it finds certain keywords in the text of the question or title it could bring up those tags as well.

Nice feature. There are some drawbacks, though.

One needs to use the products, language name, tags he is talking about within the text. The usage has to be either exactly like the tag, or needs some stemming and synonyms. So using TFS should invoke the synonymous team-foundation-server tag. I see quite some work needed to be done.

Several attempts to introduce keyword/synonym, hierarchical, or onthological tag systems have been declined. But if nothing like this is used, the suggestions might be too weak or broad and not solve the problem.

When to populate the tag list with suggestions? When it is done whenever a blank or other whitespace is hit in the text, then the word in the text could also be "normalized" using the synonym, but the ajax traffic would be quite high.

One could do it whenever the taglist textbox is entered. But then, how would this work together with the preview that is in place now, suggesting based on typing in the taglist?

This feature seems to be quite complicated, but very useful when done right.

The only real drawback I see though is that if poorly done, many will be accepting the suggestions anyway and we will end up with poor tagging. So don't prepopulate the taglist, but suggest in some other way.

Not the answer you're looking for? Browse other questions tagged feature-request status-completed tags suggested-tags .

15
Automatic tag suggestions
12
When asking a question, could the page suggest relevant tags?
781
Recent feature changes to Stack Exchange
38
How are “Suggested Tags” chosen?
26
Don't suggest tags that a question has already been tagged with
3
Automatically propose relevant tags when user ask a question

959
Show all of my question/answers to me even if they are deleted
122
This question may belong to <Another site>, consider migrating
104
A proposal for tag hierarchy on Stack Exchange sites
258
A real solution to ambiguous tags
5
Why or for what are these zombie meta-tags with no descriptions?
576
We're switching to CommonMark