Currently edits contain spelling or grammar errors/ formatting issues are rejected via invalid edit; which is one of the most used rejection reasons, but is also one of the more generic ("why is the edit invalid?") and least-helpful for the editor.

Vandalism on the other hand is only used on the rare* occasions that the edit is, well, vandalism.

Expanding this reason to cover general-defacement (accidental or not) makes the rejection reason more useful to the editor to see why their edit got rejected. I'd like to see it renamed to something like (suggestions welcome) defacement, and updating the blurb to be along the lines of;

This edit introduces new formatting issues to the post, contains spelling or grammatical errors, or is otherwise inappropriate

* From the last page of rejected suggested edits:

Your suggested change basically eliminates all traces of the previous "vandalism" reason and then people would just be confused what reason to use when there is general vandalism. You're basically requesting an entirely new reason. Defacing in the context of vandalism is not referring at all to new formatting issues or spelling/grammatical errors. It's more like adding graffiti to the post; vandalism is malicious. 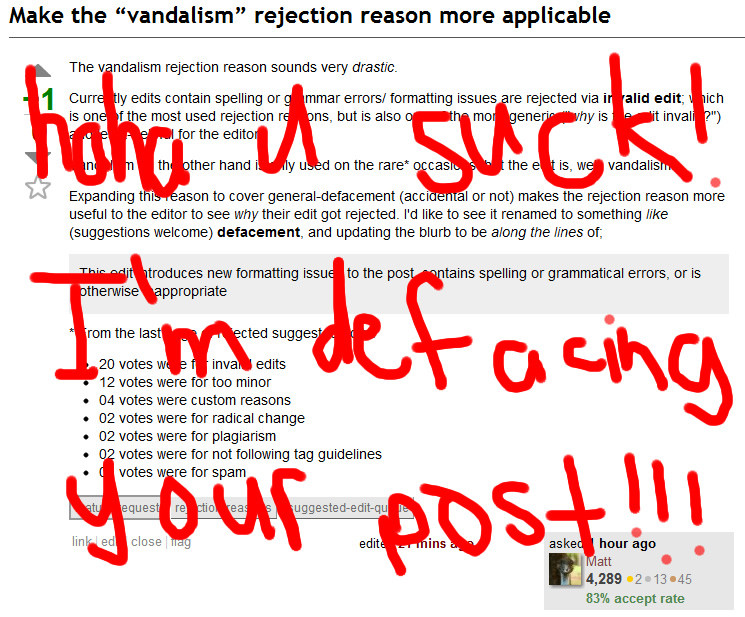 Note: You do not actually suck, this was an example.

The fact of the matter is, if their edit contains formatting issues or spelling/grammar errors, it's wrong (aka incorrect). I don't see how the rejection reason doesn't fit perfectly with that. There will always be a catch-all reason that people will use for the general cases.

It does bother me that edits that should have been some other thing and edits that are mistaken are lumped together. I thought I had a feature request to separate them, but I can't find it.

However, I disagree with lumping mistaken edits with vandalism. They are different things. Vandalism is uncommon, but it is in a class of its own.

Often, I use a custom reject reason for mistaken suggested edits, to explain the mistake. But when my reason is that it's just wrong, or would take a whole SE answer to explain, I reluctantly use “invalid edit”, or sometimes “radical change”.

“Copied content” is extremely rare outside tag wikis. It could be removed; a custom reason can be used in the rare cases it's needed. On tag wikis, “radical change” doesn't make any sense; if the edit removes some useful information, it's also an invalid edit (using the current definition). This leaves room to split the two rejection reasons:

If the rejection reasons change, logs of past edit should retain their rejection message, not the ordinal of the message which would now have a different meaning.

Not the answer you're looking for? Browse other questions tagged feature-request suggested-edits review rejection-reasons .

285
How do suggested edits work?
105
Pending approvals: allow for adding reasons to rejections
17
“Invalid edit” reject reason does not make sense for tag wiki edits
5
Clearer statement of rejection reason in some circumstances
412
Decision on rejected edits should be displayed as a notification to the editor
345
Reject an already-approved suggested edit when rolling it back
4
Add rejection reason for suggested edits: “worse quality”
87
Give new edit reviewers some audits to begin with
40
What guidance should be given when edits are rejected?
293
How do we encourage edits to obsolete/out of date answers?