How to increment number of voted questions and answers

Looking at the oldest (2008...2010) questions it's easy to find those with 50+ votes and answers with 100+. This trend seems to be changing, new questions (especially with certain tags) pretty often have only a few votes (or they stay unvoted even when the question itself is good and not just a "What's wrong in my code?"). The same goes for answers, I see a lot of very good answers but very often they don't earn more than 5 votes (in the first 10 minutes of life).

I know that an old question has been around for years so it has accumulated votes over the years but for some tags (maybe with more disciplined users) everything still works as it should.

So my question is: Stack Overflow rules were good for a limited number of users and Q/A (thresholds for badges, for examples). Are these rules still valid? If the assertion "users are very interested in reputation" is true then to change something may increase both the number of votes and number/quality of answers. For example:

EDIT
After some clarifications in the comments I would point my topic better:

TEST (TO DO BEFORE ANY REPLY)
Quick test for old pro users (I would be really interested to know the results!): pick randomly five of your simple (= no more than syntax check) oldest (< = 2009) answers. Calculate the average score per month (twelve upvotes in one year = one upvote per month). Please note that often this isn't really good because that kind of answers aren't reviewed many times (a better but more complex test would involve the number of views too). Now pick five new answers, calculate their score per month and compare them.
Moreover do the same for five pro answers. Something that involves a complex topic or something you're proud of.
What's the result of this comparison?

In that situation, who wouldn't be curious, and click on those questions/answers? And how many of those users would be similarly impressed, and pile on?

All I'm saying is that it's natural for the "rich to get richer." (That's not a bad thing – it's merely an explainable phenomenon that perpetuates over time, simply because SO allows users to sort by vote totals, making these "classics" easy to find, so that their numbers eventually climb even higher.) 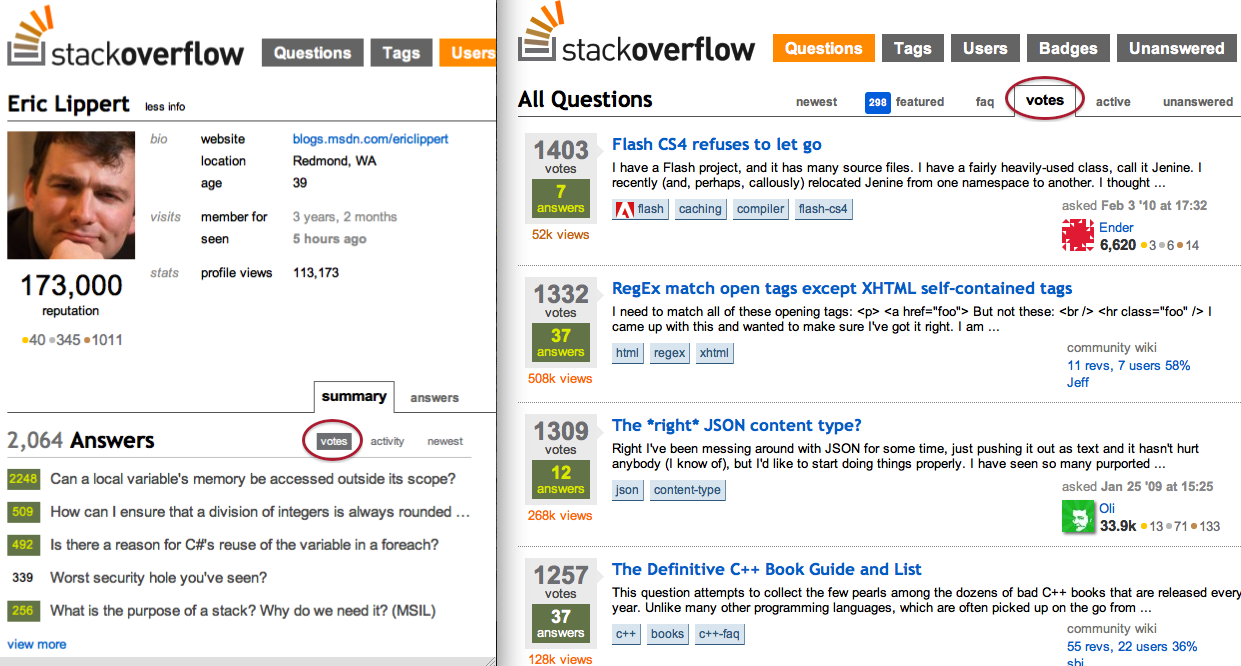 I think the real answer to your first question is that (a) there used to be a lot fewer questions; each question got more of an audience because it had less competition. Now, questions fly off the front page in just a few minutes. Rep is much harder to come by these days; and (b) it used to be much easier to ask a question that had never been asked before. Now most questions are dupes.

Not that I want to dis Isaac Newton or any other great scientist of the past, but you notice how hard it is to become a household name by discovering a new fundamental law these days? Not as easy as it used to be, is it?

Anyway, I think you've pretty much already given the answers to your other questions.

Not the answer you're looking for? Browse other questions tagged feature-request reputation .

512
How about a “Vote not to close” option to counter the “Vote to close”?
806
Allow an edit to notify downvoters: “I think I've fixed the issue now - please check”
909
Show all of my question/answers to me even if they are deleted
183
Badge suggestion: Unsung Hero (5 accepted answers with no votes)
556
How does “Reputation” work?
219
Should the weight of downvotes be increased?
253
Reset votes on migrated questions
214
Allow flagging a comment after upvoting it
1171
Don't throw away all votes when a user is deleted