Give moderators a bit more control over the Community Bulletin

A few weeks ago, I featured a meta post: Vote Early, Vote Often to encourage folks to vote. Today, I got sick of seeing it (and not noticing any effect), so I removed the featured tag. This is the result: 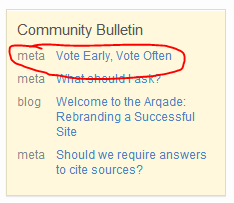 Now I think the reason is that when I removed the tag, it bumped the question, which caused the algorithm to pick it as a "hot discussion" item. (Yes, our meta is so slow that the mere act of removing a tag can make a meta post "hot".)

Initially, I was going to suggest a tweak in the algorithm, but it occured to me that the problem really is that the community can't control what gets posted there. For instance, I'm not sure how interested our users are in Stack Overflow blog posts. (And if they are interested, it's because they are SO users already.) Most offices, schools, hospitals, etc. have strict rules on what gets nailed up and requires notes that don't meet the criteria to be taken down. Nobody, not even ♦ moderators, can do that on Stack Exchange.

Don't get me wrong: I like the automated posting feature. For many sites, it should work well with a few tweaks here and there. But the bulletin will be more useful if it can be curated by some actual person who knows the community and its needs. At a minimum (and this might be all that is needed) moderators should be able to remove notifications that don't speak to their community.

Actually, it just takes a while for that bulletin to refresh - the contents are cached, so removing featured doesn't immediately remove it from the list.

You can tell, because featured / scheduled posts are shown at the top, followed by blog posts, followed by a random selection of "hot" questions. FWIW: these are your hot meta questions (those scoring 3 or more will be eligible for the board).

If you look at the site now, it's gone.

I should also mention: the goal here was to provide moderators with enough control over the contents that they could always feature the posts they wanted, while making sure that other activity was displayed in situations when there was nothing so pressing that it needed to be there. Hence the blog (note that sites with blogs get their own blog posts listed as well) and the random selection of hot posts.

Not the answer you're looking for? Browse other questions tagged feature-request moderator-tools community-bulletin .

45
What criteria are used to select the links that appear in the community bulletin sidebar block?
11
Why are our beta sites so often lacking in the category of “Questions per Day”?
21
Don't push [stackoverflow] tagged blog posts to the rest of the SE Network Bulletin Boards
73
Nailing it up on your Community Bulletin Board
6
Should [featured] posts be showing up as such in the community bulletin?