Do images need a border around them?

I've seen this popping up a lot lately. Users have been putting images inside blockquotes to add the darker border around the image so it doesn't look like the image "blends into the background" and is easier to tell it's an image.

How would I ever know that this image isn't part of the normal content without the border!? Ok, bad example (if you hate unicorns!!!). This happens a lot more often on meta when posting screenshots of the website.

It doesn't bother me so much, so I don't really care. But being the HTML semantics freak I am, I don't like the idea of putting images inside blockquotes just to create a border effect. So I'm curious how much of a problem people think this is, and if images should have a border applied to them to make them stand out. Where does everyone stand on this?

I for one use "quote background trick" only when I feel that without background around image post is harder to read.

As for your unicorn example - out of curiosity I tried how your post would look without background surrounding the image: per what I've seen in preview, it would look better without.

Here is a screen shot of your post preview I tried; I use quote background around this screen shot so that text at it does not look like part of my answer. 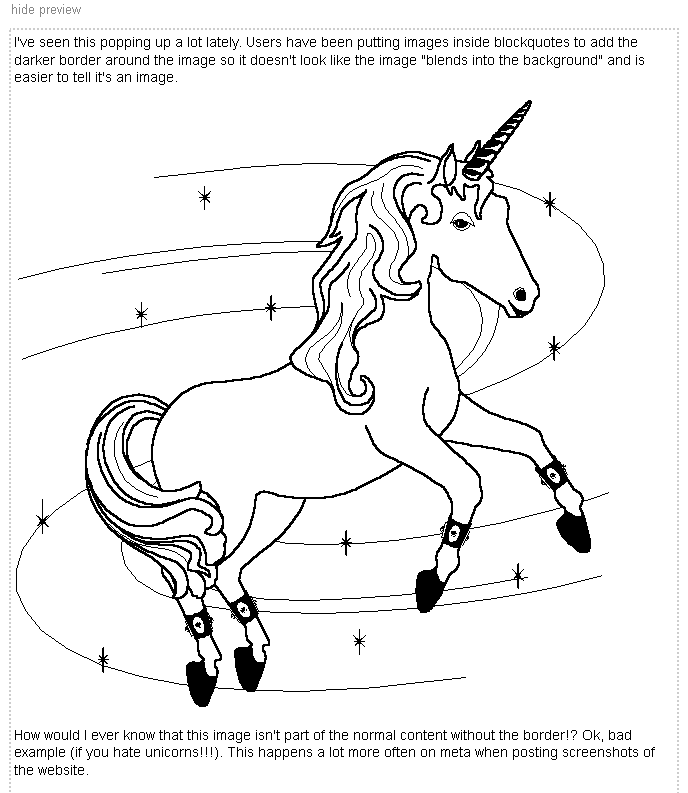 I also tested how above screen shot would look in my answer without "quote background" around it to make sure that in this case having background the way I do indeed looks better to me.

My judgement on these matters is mostly subjective; I wouldn't get into edit war over it.

I'm going to agree that it would be nice have the option to put a (black, 1 pixel) border around images. I answered a question here, about a web app that had a white background, and it was difficult to get it to look right. I ended-up using the "quote background trick" just to provide some definition around the edge. But it still doesn't look quite right.

Based-on Arjan's comment below, I agree that it looks even worse on mobile. A border would certainly be a benefit when viewing from a mobile device.

Not the answer you're looking for? Browse other questions tagged discussion design images .

14
Add an option to include a drop shadow to images posted
56
Warn new users earlier that they cannot post links or images
17
Images should be automatically rescaled and the full size linked or put into a lightbox
56
Disallow new embedded images from hosts other than the SE imgur account
381
If you're gonna talk Politics, you must respect those who disagree
456
Network-wide HTTPS: It's time
375
Updating the Hot Network Questions List - now with a bit more network and a little less "hotness"!
580
We're switching to CommonMark