Layout fix for Firefox in “Zoom text only” mode

The bug happens on all StackExchange pages.

In Firefox settings, I have Zoom > Zoom Text Only enabled (I don't like the whole-page zoom behavior). This of course makes many sites look kinda ugly when zoomed with CTRL++ but I don't care that much. However, there are some kinds of bugs that can be easily fixed.

The particular bug I mean manifests itself on home pages of each service: after pushing CTRL++ twice from normal level (CTRL+0), the list of questions has a huge blank space on the left, like on the screenshot: 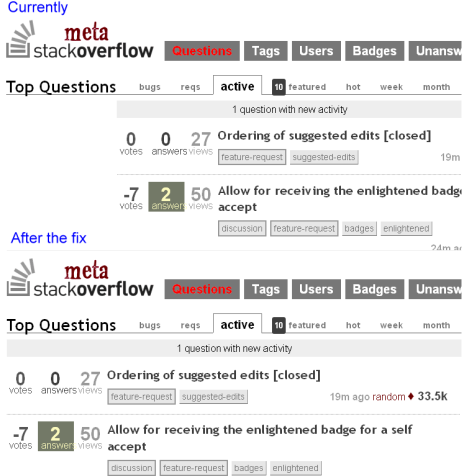 The fix is one-liner CSS:

Well, perhaps this is a bit of Firefox bug in this respect... But the text-only zooming in Firefox worked like this since I remember (this was even the default-and-only behavior until sth like Firefox 3.0 or 3.5 or 3.6), and there always have been lots of pages with this issue. I haven't really investigated thoroughly how the feature works internally, but

have pixel-perfected values, equal to 34px now. Try changing the height for instance in Firebug by adding a few pixels more (in default zoom size), and you'll get a layout crash also -- this would be a standard CSS behavior, because the floated container overflows, and the other one with the default value of clear=none will have to move. Illustrated below:

After adding the fix, there will be no layout crash, regardless of the values provided in the mentioned rules.

Edit one year later: I wrote a simple userstyle and userscript to get this fixed for interested users.

This bug appears to have been fixed at some point. I am no longer able to reproduce this bug using the given instructions (which did work in the past), and examining the HTML code shows that the #question-mini-list div is now wrapped in another div designated as #qlist-wrapper, which is styled as:

Thus, this seems to be status-completed now.

(However, there's a similar issue affecting user profile pages that does not seem to have been fixed on SO yet, although the new meta.SO design seems to be free of it. If it doesn't get fixed by the upcoming design update, it might be worth filing a separate bug report about it.)

Not the answer you're looking for? Browse other questions tagged bug status-completed design .