I have six upvotes for the one question with no intervening history. They have been summarised into two groups - one with 4 events and one with 2 events. However, when you expand either, both show all 6 events. Minor I know, just letting you know. 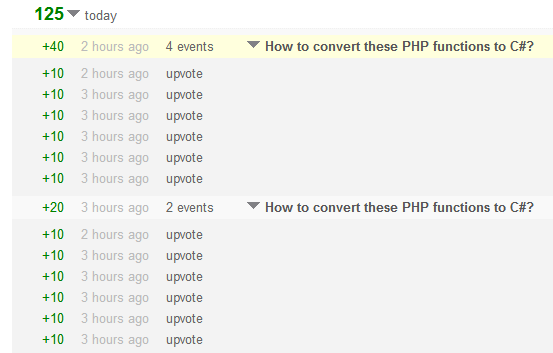 I've confirmed/reproduced the issue behind this. It is as I said. When you have new and old events on the same post in your history (only tested for the same day as well), both of them will expand to show the full list of all events for the post, rather than being limited to the new and old events as they're split up. 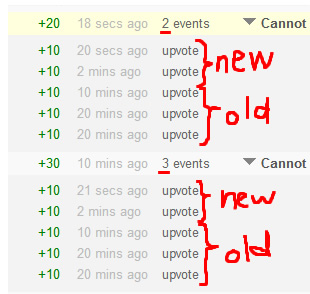 They must have made a change somewhere that caused this to start happening, because it didn't used to do this previously.

The below is what I saw just a few minutes ago (And have seen similar on quite a few occasions in the past). A couple of minutes later it has merged into one drop down with a correct total rep count.

I see Sulfurized Demonbobby comment above about the asynchronous nature of the updates, which I can understand if it was a a short while (a few minutes ago), but think it is unreasonable to have inaccurate counts (5 + 5 + 5 is 15, not 10) some 25 mins after the event took place.

February, 2016 2017 and this bug is still scurrying about. It's not a big bug, but at least let us know if you're going to address it or not.

Most recent reproduction, found on video.stackexchange.com: 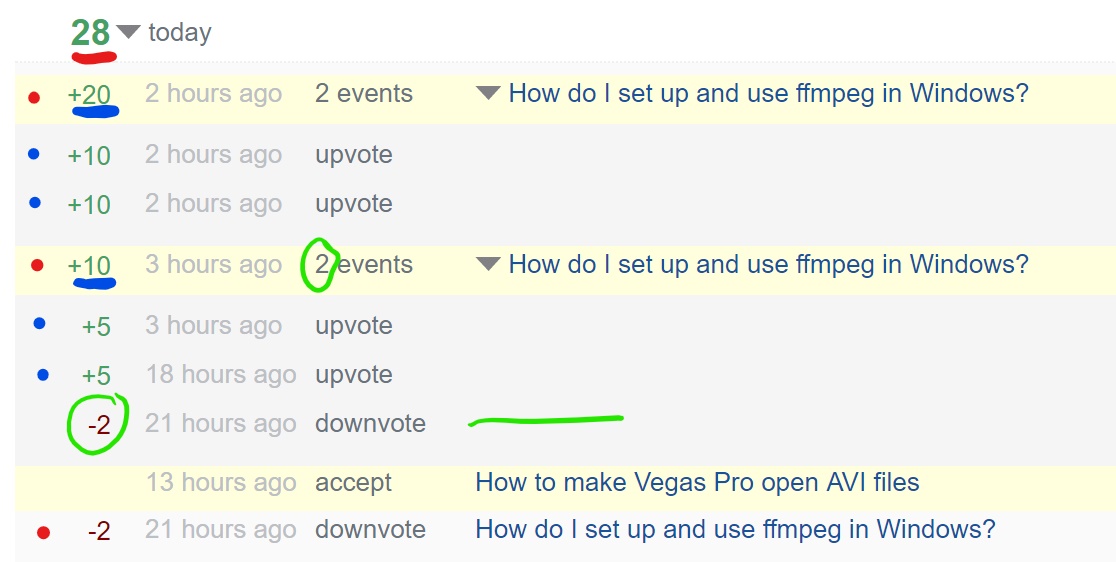 Blues and Reds should add up to each other. Greens are WTF.

On that post, I received 3 upvotes and 9 downvotes. You can see that the blue brackets are the same events, not different events, and the red stars list what's new, but appear to be incorrectly added because all events for the day are listed below, instead of just the new ones.

I reproduced this recently as well. I made a different meta post, however, because I did not see this one first. The snapshot below is color coded to show where confusion might occur because of this. It did right itself about an hour later. 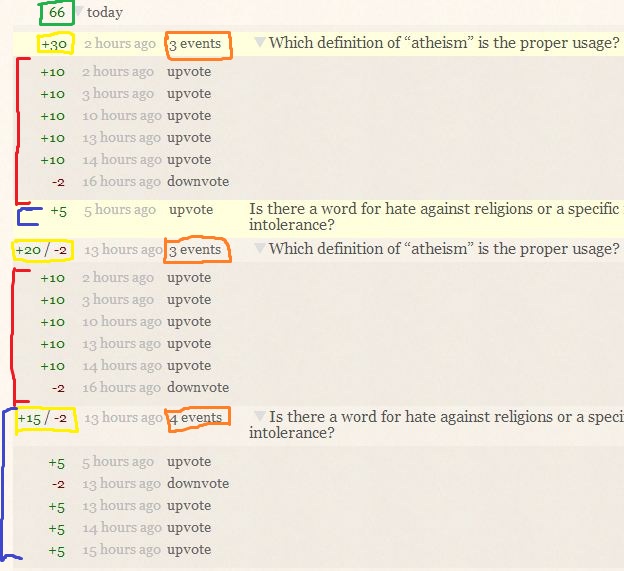 I have just seen this issue... in fact it appears to have two distinct symptoms which appear in the UI:

Here is the reputation with the unexpanded event - no actual error shown, except that it could be considered a UI enhancement-request as the reputation changes are not all contained under one expandable line, and it would be more aesthetically pleasing if they were:

Here is the event expanded - this is the bug as it would suggest a reputation change of 11 rather than 6:

Finally, after the page was refreshed, both issues appear to be, and indeed are, resolved:

NOTE: I was going to post this as a question, but then realised that it would have been a duplicate (not that it matters that much) of this question and Incorrect grouping/duplication of rep events when unfolded, when I saw that other people had posted similar experiences as answers, then I reasoned that I would do the same. I hope that was the correct thing to do - I've never raised an issue as an answer before and it seems rather counter-intuitive. 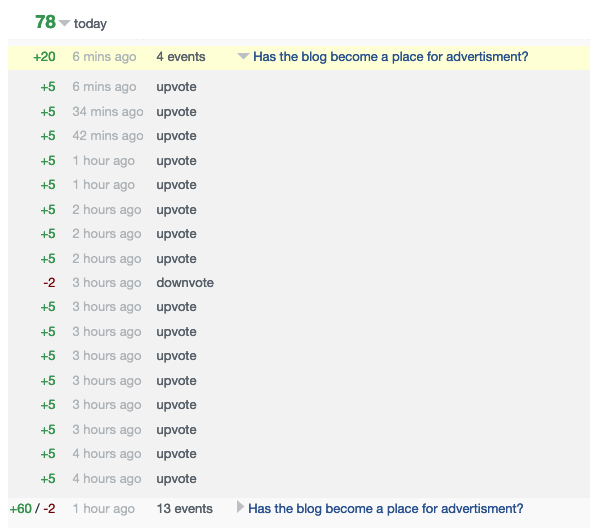 Not the answer you're looking for? Browse other questions tagged bug reputation reputation-history .

219
Should the weight of downvotes be increased?
180
The problem with extrinsic motivation
13
Combine serial upvote/downvote reversals into a single event in reputation history
5
Reputation tab says I've been downvoted, but it shows that I haven't been at the same time
58
Separate and visually indicate reversed events from the day's reputation changes
181
Change rep required to downvote on MSE
11
Show downvotes on reputation “post” even when suspended