The new review system seems to work like a charm, at least the "suggested edits" queue is nearly always (near) empty. However, I've recently come across some users that approved edits that I'd never thought a second about approving them as they were clearly invalid/wrong edits. Users that approve such edits often turn out to have stats like "400 approved edit, 3 rejected edits" and are typically not the type of reviewer that really helps to keep the quality high.

As the new system works so well and fast, isn't it the right time to increase the threshold for approval/rejection (or at least the former)? This could potentially suppress the effect that such approve-them-all reviewers have.

We are much closer to the Wikipedia way, which is compatible with the purpose of the site. We also have notification and bumping mechanisms in place. Edits that the original poster or the community did not like get rolled back soon. On the other hand: the original poster retains the "ownership" of the post and edits should aim at making the same question easier to be found, recognized and answered, not at changing it to a different question.

People who have approved 400+ edits typically have posted a lot of their own content as well. There are about 300 of such users on Stack Overflow, all but one with 2K+ reputation, which means that all of them (along with about 16000 other users) already have the edit privilege. All those 16K users can edit anything, needing zero approvals for that.

Even a higher reputation user may (and will) occasionally damage content by issuing or approving an edit that does more harm than good. (These actions do not bring any reputation benefit to the editor/approver and are probably done out of good intentions most of the time.)

The good side of low approval thresholds is that most of the time, an edit or suggested edit gets published very quickly.

This feature request addresses a real problem. I would, however, prefer solutions that do not make the editing process significantly slower. I don't think that there is currently any efficient way for an approver to learn about a rollback of the approved post, and to learn from their own share of the mistake.

I believe this feature was just implemented, per Recent feature changes to Stack Exchange it now requires three reviewers:

This increase in votes makes a lot of sense to me, as I can't believe what gets approved. I wouldn't mind seeing suggested edit votes increased to five, as other review types. 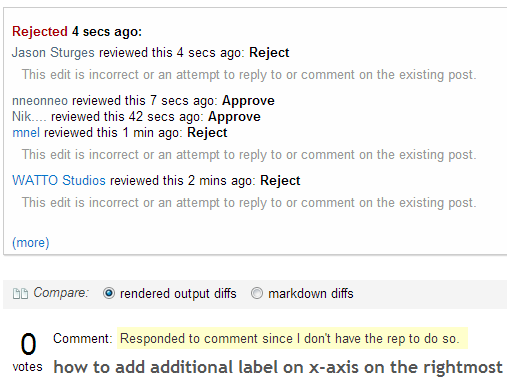 Something akin to this now seems to be in place.

Suggested edits are showing more than the usual two reviewers (or three in case of disagreement).

On the other hand, absent an official announcement, it's also possible that this is a more minor change to show all the reviews of a suggested edit without changing the actual threshold required for (dis)approval. With the new review queue, suggested edits are being processed quite quickly, so it's plausible that many people could review any given suggestion at the same time. I've yet to find a suggested edit showing clearly that the edit wasn't approved until the third vote was cast, but the aforementioned quick clearing of the queue makes this hard to test.

359
Reject an already-approved suggested edit when rolling it back
159
What can we do to stop bad edits getting accepted?
9
Increase number of suggested edits reviewers if there is no consensus between them
122
Give Community ♦ a review ban
87
Give new edit reviewers some audits to begin with
53
Change edit approval threshold to (# approve − # reject ≥ N)
308
Moderators should be able to manually ban users from suggesting edits
68
Can we have a system to submit potential robo-reviewers for moderators attention?
241
Review queue workflows - Final release