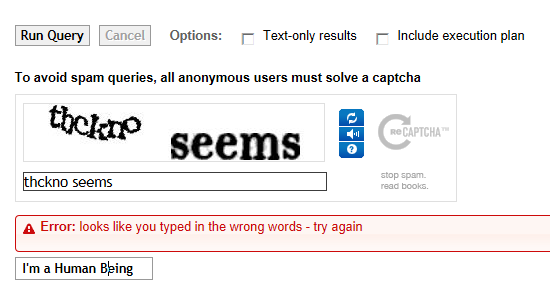 14
Did the anti-bot algorithm thresholds get tightened?
14
Was the robot detector upgraded today? SO keeps checking if I'm real
4
Is it just me or the Captcha increased in frequency?
2
Getting Captcha Frequently
1
Frequent verification on edit
225
Why doesn't the Stack Overflow team fix the Firesheep style cookie theft?
120
The reCAPTCHA has become too difficult for humans to solve
133
Can I please be trusted to not to script a bot that dumps an endless stream of spam messages into the chat?
38
Are captchas necessary for established users?
14
How to make the developers and moderators aware of a problem (which is already mentioned in an old duplicate)?
See more linked questions

550
How about a "Vote not to close" option to counter the "Vote to close"?
10
Can the captcha load first, then the robot picture?
144
Tag scores have not updated; script did not run
64
Stack Overflow knows I am a robot and greets me in robot language
13
How to pass "I'm not a robot"
10
Testing that you are not a robot
37
Do not repeatedly require trusted contributors to solve captchas when they attempt to post
12
Stack Overflow CAPTCHA-Check fails - Oops! Robot detection failed