Give moderators a tool to invalidate votes between users

Vote fraud happens on Stack Exchange sites, it is a natural consequence of the reputation system and one of the duties of a moderator is to deal with cases of suspected vote fraud. There are various tools to help moderators investigate vote fraud, and they work very nicely (especially after they were updated a while ago). But the process begins to become somewhat fuzzy and complicated once the vote fraud is confirmed and it is time to clean up the mess.

The old way was to just merge the sock puppets into the main account, this invalidates votes automatically. This is no longer done in many cases, a bad merge causes a lot of work for SE staff and has quite a few very undesirable side effects.

Deleting sock puppets is the second way, but that can only be done for blatant low-rep sock puppets with hardly any original content to their account. More complicated cases of voting irregularities cannot be handled that way.

My idea would be to streamline the process of invalidating votes and give moderators the power to do so, though with review by the community team. It would work similar to merging users, which mods can initiate but which has to be reviewed by a dev for users above a certain rep threshold.

Ideally, we mods would get a page where we can add all the involved users and which would then display the voting statistics between them and easy links to the relevant tools. It should also contain a free-form comment field where we could write up the evidence we have. The page would serve as a paper trail for other mods to quickly check up on what happened there and for the community team to be able to see at a glance all the relevant information. This should also be useful if the user writes a mail to SE and they check up on what has been done. Once the mod is confident in the collected information, he should be able to invalidate votes, which would submit the whole report to a place where mods and SE staff can check it out.

I personally think it would be safe to give mods the ability to invalidate votes, as long as such a paper trail exists that makes it easy for SE to see what happened in each incident (and undo it). But one could also require either a second mod or an SE employee to review and validate each case.

I support this proposal.

As noted, we deal with a number of people who try to cheat the voting system here. I've personally handled ~50 such cases on Stack Overflow over the last month. Every one of these instances can take some time to deal with, and ways to make this process more efficient can save a lot of effort on the part of moderators and the community team.

For obvious sock puppets from a central user, merging or deleting those accounts is currently an option. However, we've had enough problems with incorrect merges that we now only use that in the most clear-cut cases, and deletion is a fairly destructive act.

Some of the most harmful behavior around vote fraud comes from rings of friends and coworkers who vote for one another. Beyond the reputation boosting, this can lead to wrong or harmful answers being voted up well beyond correct ones. I've had more than one person point to incidents of this and say their trust in the site had been reduced as a result. These are clearly separate users, so we can't merge them, and deleting their accounts seems far too extreme. Directed vote invalidation is needed in those cases to eliminate the harmful effects of these fraudulent votes on the many questions and answers involved.

For those concerned about giving moderators this ability, I'd point out that we currently have the capability of performing far more destructive actions. This tool would in fact allow us to avoid having to employ some of those actions while keeping users honest. All of our current moderator actions can be reviewed right now by other moderators or SE employees, and I would expect no less from this.

First off - I like this idea, but I don't like either of the options you put forth.

There's definitely room for improvement in the current system. But not by creating more bureaucracy, and not by making the current process - which is difficult in part to reduce the danger inherent in the task - more dangerous.

I want to emphasize that normal votes are private on Stack Exchange. This isn't an accident, or something we're cavalier about - it is important that anyone is able to vote according to their conscience, to rate each post according to how helpful they honestly feel it is to themselves or others... and to do that, they must be protected from external pressure to vote a certain way.

Normal users, and even moderators, cannot see who has voted on a particular post, or see where a given user has cast their votes. Even developers have to go well out of their way to find out who has voted on their own posts (developers and some employees do have access to the databases in order to do their jobs, so it's not really practical to block this information entirely... But that doesn't mean we have to make it too tempting to abuse).

While it is possible, in very limited circumstances, to make an educated guess at who voted, this is information we're obligated to protect.

All that being said, there are situations where it is necessary to remove votes that we have strong reason to believe were not cast in good faith:

A definition for voting fraud and abuse

The history of tracking and reacting to unusual voting patterns on Stack Exchange goes back to late '08:

I was pleasantly surprised to find that the vast, vast majority of Stack Overflow users do not engage in revenge downvoting. Unfortunately, for those users that do, the pattern was quite clear.
...
While working on this code, I also realized that we should be checking for the inverse of this behavior — unusual upvote patterns. To game the reputation system, unscrupulous users might create alternate user accounts that vote up their main account.

Over the next few months, this system was refined into a script that periodically checks for, and reverts abusive and fraudulent voting. And along with it, the core philosophy of voting moderation:

it will always be easier to earn reputation legitimately — by asking good questions and providing great answers — than by gaming the system.

The score of a given post should always reflect the number of members - real people - who've found it useful. Revenge voting, sockpuppet voting, and meat puppet voting all hurt that - and often worse than their actual impact on post ranking is the effect they have on the perception of post score. After all, why waste time writing a good, detailed answer when someone else can dash off something - anything - and get a larger reward for their (lack of) efforts?

We've never stopped improving the automated tools for detecting abuse, but sooner or later you have to face up to the realization that - like all moderation of human activity - doing it effectively requires some human input. 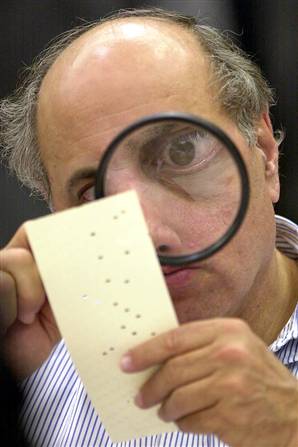 Dealing with voting fraud then, is a constant balancing act between keeping individual votes confidential, and allowing trusted members enough oversight to catch and correct anomalies. As Anna notes, only broad patterns - which must involve a significant number of votes - are exposed, even to moderators. This goes a long way toward preventing abuse - but it also obscures certain information necessary to properly evaluate some voting patterns.

The actual mechanisms for resolving anomalies are the easy part - as you note, moderators can easily delete or merge sockpuppets to handle blatant abuse (with merging strongly discouraged except when it is a certainty that both accounts belong to the same person).

Vote invalidation is technically simple as well, but isn't currently available to moderators for one reason: it is intended for situations (like revenge down-voting) where there's a pretty good chance the accounts are legitimate. And if the accounts are legitimate, there's a decent chance the votes are too - even if the patterns look a bit suspicious. The fraud script - by far the largest vote invalidator - has access to sufficient information to distinguish between, say, a naive meatpuppet and top users. Well, most of the time. Being a bot makes him free from temptation, but also more than a bit stupid.

Adding more logging and sanity-checking after the votes have already been invalidated, users messaged, accounts suspended... Doesn't really solve anything. Indeed, it stands a good chance of catching more people in the crosshairs, upsetting innocent users, and creating more work for everyone involved. Adding more signoffs without also adding more information similarly creates more work - and also a false sense of security. If you're unsure about a given situation, nothing stops you from asking for another set of eyes right now - if you're not already doing that, forcing you to probably won't help.

To prevent abuse, how about:

Plus everything would obviously go in the usual log.

I think some combination of those restrictions or features would go a long way in making sure that the process is pretty transparent while still making it useful for moderators. The process right now is… not a process.

It’d also discourage deleting entire users to invalidate votes, which is kind of what I do right now if their answer, reputation, and other participation count is sufficiently low – and I was mistaken once on that. (And I am really sorry for it.)

This is a terrible idea. So now we want the moderators to be able to change our minds for us?

If there is abuse, deal with it in the prescribed manners. If not, don't keep giving more power to abuse the users to the moderators.

Not the answer you're looking for? Browse other questions tagged feature-request status-deferred moderator-tools serial-voting sock-puppets .

64
Shouldn't anonymous serial downvoters be banned from SO?
35
Should moderators use their abilities for personal reasons?
11
Privacy concerns when merging accounts
5
To whom should we award bounties on Meta?
10
Serial downvotes not being reversed?
5
Will the downvote-abuse script ever be able to catch downvotes cast over an extended period of time?
-17
Reversing an unpopular community decision