Was Reviewer badge promoted from Silver to Mithril?

I already noted that the Reviewer badge seems like a heck of a lot of work for a paltry silver. It now looks like I may have been understating the matter. Apparently it’s even harder than I thought, since I have over 1,000 reviews (and probably over 1,000 actioned reviews, too), yet I still have no such mythical badge. Here are quasi-current stats for ELU.SE: 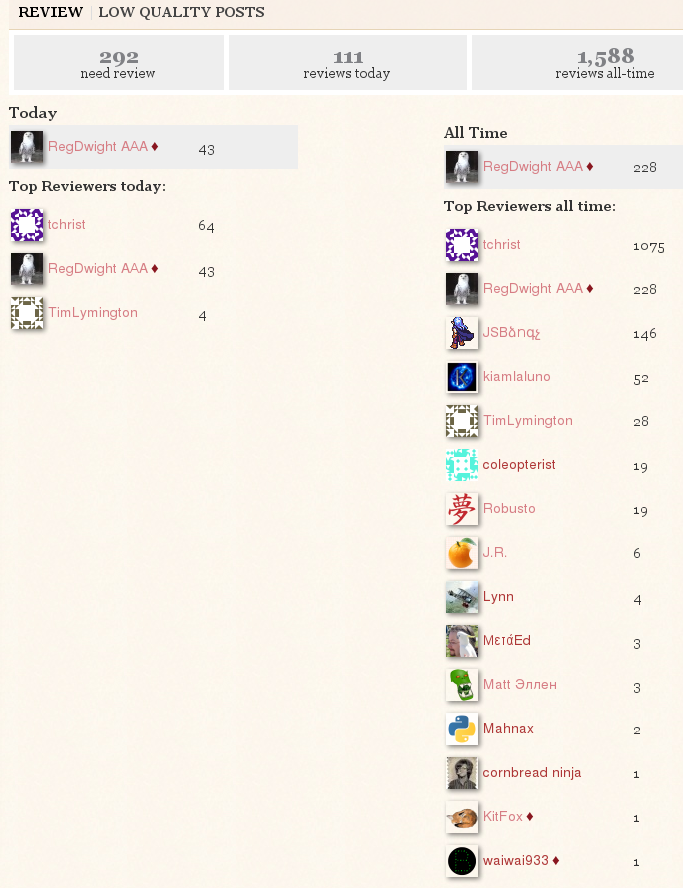 Is the reviewer badge not being awarded during the new review beta, or is this a bug? Is it somehow because it’s on ELU not SO? Why would that matter? Even if it did, it should be easier not harder, since all the numbers were set up to fit the Trilogy, not the little guys.

I’ve waited something like 32 hours now, and still no sign of it. What in the world is this badge made of anyway, mithril? I guess that would fit with the mythic theme of the unobtainable, but what do you have to do to get this silly thing, anyway? Vanquish a balrog in Moria to get at his stash of true-silver? Sail into the uttermost West with a Silmaril to guide me on my errand?

I feel like undying doom has been been laid upon me: to seek forever a tiny badge that glimmers as faint as a distant star, but never any closer to it draw.

A ship then new they built for him
of mithril and of elvenglass
with crystal keel; no shaven oar
nor sail she bore, on silver mast
the Silmaril as lantern light
and banner bright with living flame
of fire unstained by Elbereth
herself was set, who thither came
and wings immortal made for him,
and laid on him undying doom,
to sail the shoreless skies and come
behind the Sun and light of Moon.

From what I can tell you are looking at the new review tool which is still in beta and does not contribute to the count for the badge.

You want: https://english.stackexchange.com/review/first-answers that will take you to the old review tool which will contribute to the badge count. Your progress for the badge is indicated on the right hand side of this tool and can be seen to increment each time you click "review post." You must review 1000 posts from here and action >=200 of them.

The new review badges (Custodian/Reviewer/Steward), which applied to the new review system, were implemented on Sept 21, 2012. As such, you earned Reviewer for Low Quality Posts on Sept 21, and then again for Close Votes soon after.

Not the answer you're looking for? Browse other questions tagged bug status-bydesign review review-badges .

14
Silver Reviewer badge much harder than Gold Electorate: Why?

25
Make Proofreader a silver badge
18
Is it possible for moderators to earn the Reviewer badge?
42
Gold and silver versions of Proofreader badge?
14
Silver Reviewer badge much harder than Gold Electorate: Why?
80
Improving the Quality of Reviews: Project Honeypot
18
Can we have a way to earn greater review queue privileges?
6
Additional requirement for Steward or Reviewer badge to help new reviewers learn about using “Skip”
45
How does the review-needed indicator work exactly?