First, a foreword: I've searched rigorously for a question that addresses the same concern that I'm about to detail, but the closest I've came is this question. I certainly hope others understand that this is meant to address the same problem that has been addressed before, but from a different perspective. Read this with that in mind.

With that out of the way, let's get to the crux of the problem: the conflict in domain terminology that plagues the Stack Exchange network. This isn't a gripe about the definition of an 'unanswered question' (in fact, I think it makes sense to define it as a question with no up-voted answer, since such a question might as well have no answer at all), but instead is a gripe about how there seems to be 2 slightly different definitions of an unanswered question. For the sake of argument, we're going to go into this with the mindset of a brand new Stack Overflow user, one who is ready to help others with their programming problems. We are going to reference these two screenshots throughout, each of which is slightly different (and will be embedded when need be, but have been linked in order to keep this question slightly shorter):

I've just joined the community. I'm somewhat familiar with how SO works already (as most people who program probably are, thanks to the awesome SEO), so I have a grasp on the Q\A system already. I am ready to help, but I figure I could make a greater impact if I helped older questions that have yet to be answered. The problem is already appearant: which button do I click? The 'Unanswered' section is literally right above the 'Unanswered' tab from the 'Questions' section:

Thinking logically, the giant section button is obviously given more precedence, and will probably be given more details, so I will click this one first. The first thing to note is that this section is done well. It is very quickly communicated to the user what is meant by an 'unanswered question', thanks to this:

This element is prominent in the page, and defines the domain term of an unanswered question, which one would usually assume meant is a question with 0 answers. This is very good, and helps to avoid common confusion. The sub-tabs then expand on this, which make it easy to find a plethora of questions in need of quality answers: questions hot off the presses ('Newest'), questions that I might know how to answer ('My tags'), great questions in general ('Votes'), or questions that really don't have any answers ('No answers'). An important point here is the last tab: it solidifies the definition of an 'unanswered question'. Overall, the 'Unanswered' section exemplifies a great way to define a domain term.

So, let's rewind a bit to see the issue once again. We're back where we started, so we don't know the definition of an unanswered question. This time, our logic is that an unanswered question is still just a question: it would make sense that they would be a tab within the 'Questions' section. This time, however, there is nothing on this page to suggest an alternate definition of an 'unanswered' question. To me it still means a question with no answers, and I will not understand the true definition until I go to the 'Unanswered' section, where I then have to re-learn something I thought I already understood. This, right here, also baffles me to no end:

First, this shows the same number of questions as the 'Unanswered' section, despite a different definition of such. Without the previous subtext clarification, my mind assumes the natural meaning of the words, and that makes things worse yet: It'll take me longer to get 'corrected'; I likely won't notice the alternate subtext, since I would have assumed that the two areas of the site were essentially the same. the problem with this is that, next time I visit the site, I might pick the 'Unanswered' tab instead, and I'll have to learn an alternative definition of what an 'Unanswered' question is.

Anyway, let's continue, since it gets worse: I have literally no idea how these questions are sorted. The title still says 'All Questions', and some questions have my tags, but most don't: 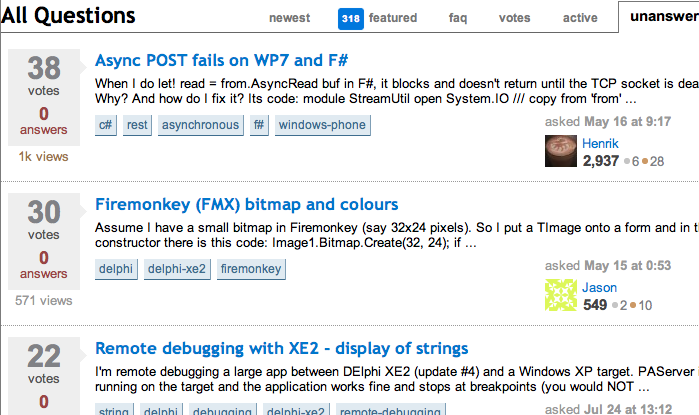 Upon further examination, I can tell that questions are sorted by vote counts, but this takes actual mental operation, as opposed to seemingly-subconcious understanding from the 'Unanswered' section. A big step down in user experience. Also, it seems confusing to figure out how to sort by tags, and takes experimentation. And yes, I do know how to do it, but it just seems rougher than the alternative of the simple tab under the 'Unanswered' section.

That's all I've got, (and wow, this came out longer than expected), so here's a brief summary/TL;DR for the quick-scrollers:

I'm curious on other people's opinions on the system as it stands, and I'm also curious to hear some potential solutions on how to fix this issue, or if others think it should be considered an issue at all. My argument already had one major flaw in it (thanks to slugster for pointing out my misunderstanding of the 'Unanswered' tab), so I'm curious about any other flaws my argument has, as well.

When talking about the unanswered tab you said:

I see questions with answers! Dumb website, not actually doing what I asked!

But when I go to the same location, I see dead people questions with no answers, just like the tab promised. A quick and totally scientific sample of four of the 14424 pages showed that all the questions had no answers.

So it appears you have your example slightly mixed up - the unanswered button contains questions that have answers. But as you point out, it has a big fat qualifying statement next to the count. Immediately to the left of that counter is another tab that is titled no answers which gives you the exact same view as the previously mentioned unanswered tab.

So I would say there is no problem - the domain definitions seem to be all in order.

Not the answer you're looking for? Browse other questions tagged discussion unanswered-questions tabs user-experience terminology .

690
How do I get attention for one of my own questions without a good answer?
888
Why aren't people voting for questions?
1427
Fastest Gun in the West Problem
1713
What is the XY problem?
290
Enable automatic deletion of old, unanswered, zero-score questions after a year?
2765
A Terms of Service update restricting companies that scrape your profile information without your permission
2391
Firing mods and forced relicensing: is Stack Exchange still interested in cooperating with the community?
2053
Stack Overflow is doing me ongoing harm; it's time to fix it!
930
Firing Community Managers: Stack Exchange is not interested in cooperating with the community, is it?