What's with all the PHP hate? [closed]

Ask Question
Asked 8 years, 7 months ago
Active 8 years ago
Viewed 1k times
-17
As it currently stands, this question is not a good fit for our Q&A format. We expect answers to be supported by facts, references, or expertise, but this question will likely solicit debate, arguments, polling, or extended discussion. If you feel that this question can be improved and possibly reopened, visit the help center for guidance.
Closed 8 years ago.

Somebody else has to have noticed that questions that get hit by the nuclear downvote warhead are usually related, whether directly or peripherally, to PHP.

I'd assert also that part of this downvote storm happens because PHP is often people's first language, and is often self-taught in early stages. Furthermore, I'm certain that there is a better way to deal with such questions than downvoting them into oblivion and leaving unpleasant, sarcastic comments.

The best way I can think of to deal with questions like this would be to immediately recognize that you're dealing with a question with a known fundamental flaw: the writer's broadly incomplete knowledge of the language, and of programming in general. You might be thinking that that statement is a little harsh, but anecdotally, I started using PHP when I was about 14. If I'd known SO had existed then, I'd probably have earned myself a posting ban within less than a week with all of the low quality crap I'd have posted. PHP was my second language, and I was using it long before I had any sort of structured programming education. I'd imagine that a significant portion of early PHP users, such like those who ask questions like those currently being discussed, are in a similar situation.

So anyway. Step one is to read the question, and search not only for the problem, which will likely be obvious, but also for The Problem (the underlying misconception or lack of knowledge that led to the asking of the flawed question) which will be hidden between the lines. The second would be to address both problems, with special emphasis on The Problem. A good way to do this might be to keep tried, tested, and well-informed PHP tutorials on hand, as well as recommendations about good style and good practice.

Remember that new developers are like children: the things that influence their early style will create habits that will be very hard to break later; it's imperative, for their future as developers, that they be guided towards good practices that promote structured development and maintainability, as well as readability and safety and testability and a host of other things, and that a lack of guidance will have a similarly destructive effect on their ability to adapt to better practices later.

For what it's worth, it helps to remember that you were all the same way once; guideless and directionless, adrift in a sea of bad practice and sloppy code that if you went back now and tried to read it, it would make you cry blood. I still occasionally run into code I wrote back then and man, it's horrid.

Things to come away from this question include:

CAOP stands for "closed as of posting", i.e. the question was open when I included a link to it, and has since been closed.

The accuracy of my claims of bias has been questioned. Rudimentary statistics, considering ONLY THE FIRST PAGE of each tag (statistics over wider periods of time may vary)

To the extent that PHP gets more downvotes than other tags, I think it can be easily explained by the proportion of inexperienced users asking bad questions, most of which could have been answered by a quick search.

The default state of public internet sites is useless garbage. Sites that aren't garbage are constantly trying to go back to being garbage. They want to be garbage, the law of internet gravity pulls them towards it: it's their natural resting state. Countering this downward force and preventing sites from becoming garbage requires the constant exertion of moderator energy (M) along an opposing vector. If we start making exceptions to the site's standards, it's only a matter of time (and not that much time) before the weight (W=N+T+S) of the noobs, trolls, and spammers brings it down.

If the site is going to keep the experts who provide the answers interested it must constantly work to maintain some quality standards. If some people can't handle negative feedback, that's their problem. They will not be missed. 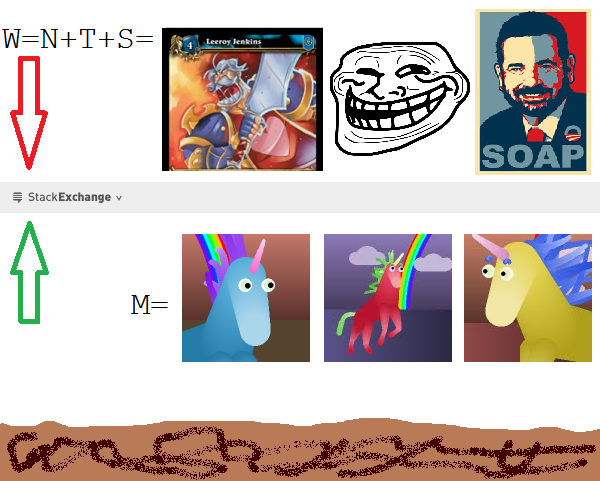 QED, no sympathy for bad questions.

Not exactly sure what you are trying to achieve with this post, but you seem to think people that are following the [php] tag are more willing to downvote questions. Or you notice that [php] questions often get lots of downvotes.

Well as a follower of the [php] tag (among other tags) I can tell you the PHP tag produces just so many crap. And if a question is crap I really don't mind to downvote it without any remorse. I don't think I get a particular good feeling about downvoting often, it's the opposite. It makes me a little sad because of the fact there is so much crap that deserves a downvote.

When I see a dumb question, even if I don't downvote it, I usually comment on it,

Although I do agree with you that a comment is the nice thing to do, but you have to keep some things in mind:

When you identify a question asked by a fledgling programmer with a flawed understanding of a language, you should put a little effort into correcting their understanding.

I'm all for correcting of understanding of a language. That is if the misunderstanding is not something OP could have simply found out by reading into some documentation him/herself. Or when OP doesn't just give some set of requirements and yell canihaztehcodez.

Those who can, if you see such a question, consider searching for a duplicate and voting to close,

100% agree. When there are dupes close vote as dupe. However when there are 10.000 exact dupes already to be easily found on SO I say downvote and close as dupe. And after it is closed delete it. If there are already 1000s dupes it shows a lack of research of OP (which imho deserves a downvote).

So now to your questions:

Downvote when they deserve it without even blinking with my eyes (yes I'm an ice-cold downvoter) :) And close vote if it cannot be salvaged. Leave a comment if OP could fix it and add it to my list to check later for improvement.

No it makes my a sad sad panda.

PHP is a easy language to start in "coding". Hence everybody just starts doing stuff without reading any documentation, without doing any research. Besides this fact there will always be lots of people trying it out (e.g. new users). And besides this [php] has a nice community who tries to keep it tidy / tries to do housekeeping. Which is a good thing imho. Basically [php] attracts a lot of crap (I think more so than most other tags) and the fact that you see a lot of downvotes makes two things clear:

There are a lot of terrible tutorials on the web which is a serious problem for PHP. THe ultimate source for PHP is the official manual which is maintained by the community and is a very good resource on most topics. Also there is another community driven resource here called PHP: The Right Way.

Since you also have a tl;dr:

Crap questions should get the downvotes they deserve. There is no bias for [php] only for low quality posts.

Stack Overflow is a question and answer board, not an instructional site to teach people how to program. It's not that we enjoy downvoting; we are fixing the signal-to-noise ratio for the site.

Downvote and close them, with an explanation of course and a "summer of love" appropriate welcome comment. This will hopefully teach the asker that the type of question they've asked is not a good fit for StackOverflow and improve their behavior in the future.

You are not providing the user a service if you don't do this, in my opinion. Eventually they'll come across users who will take this action, so the sooner they are taught the correct type of question to ask and how to ask it, the more they will get out of the site, and the more valuable they will be to the community.

Since PHP seems to specifically exhibit this issue more than other topics, what are some objectively good PHP learners' aids; tutorials, practice guides, examples, etc?

Not sure because I'm not a PHP expert. But in the javascript and jquery tags we have similar issues with new users. I always direct them to MDN. I'm sure there's a similar resource for PHP out there.

Almost everyday there is a new question posted about:

These questions already have lots of duplicates, and it is very easy to find the answer by just reading the PHP manual here and there

Note: YES, I do know mysql_* functions are deprecated. But so many beginners use them that they should end up on the help page for mysql_query if only they did some simple research first.

So, my point is: I don't see a problem downvoting and closing very basic questions whose answer is easily found just by reading the PHP manual!

Not the answer you're looking for? Browse other questions tagged discussion questions etiquette new-users question-quality .

33
What to do when you encounter vengeful users?

903
Why aren't people voting for questions?
1450
Fastest Gun in the West Problem
1808
Could we please be a bit nicer to new users?
580
Exit strategies for “chameleon questions”
1772
What is the XY problem?
2780
A Terms of Service update restricting companies that scrape your profile information without your permission
2442
Firing mods and forced relicensing: is Stack Exchange still interested in cooperating with the community?
2137
Stack Overflow is doing me ongoing harm; it's time to fix it!
949
Firing Community Managers: Stack Exchange is not interested in cooperating with the community, is it?