Can/Should you be able to upvote your own posts?

The main reason is that it would kind of destroy the system. When a post is first posted, the system doesn't know if it is bad or good, which is why we have voting. Voting is the system's primary way of finding the quality of a post.

The system tends to lean on the side of assuming a post is good - it trusts you to some extent, and assumes that you would vote it up if you could - you obviously thought it would be a worthwhile post, right?

Another problem: Unless these self-votes weren't counted, it would be a way to cheat your way to tag badges - badges awarded for having a certain number of upvotes in a tag.

Also, what's in it for you? We couldn't reward rep for such an action - you could get 5-10 rep for every post, be it good or bad, which would destroy the reputation system.

Since we wouldn't be able to award rep for it, all that would come of it is a new zero score: one. (and potentially a loophole for tag badges)

Of course you should not be able to vote on your own posts. It is a given you think your own posts are helpful and / or well researched, that's why you posted them in the first place.

But the point of voting is that other people think your post is great too. That's not something you as a poster could ever objectively determine yourself.

Note that you cannot do so right now: 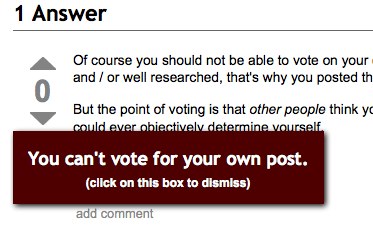 Voting for own answers/posts is still not possible. I also agree that it should not be possible at all. 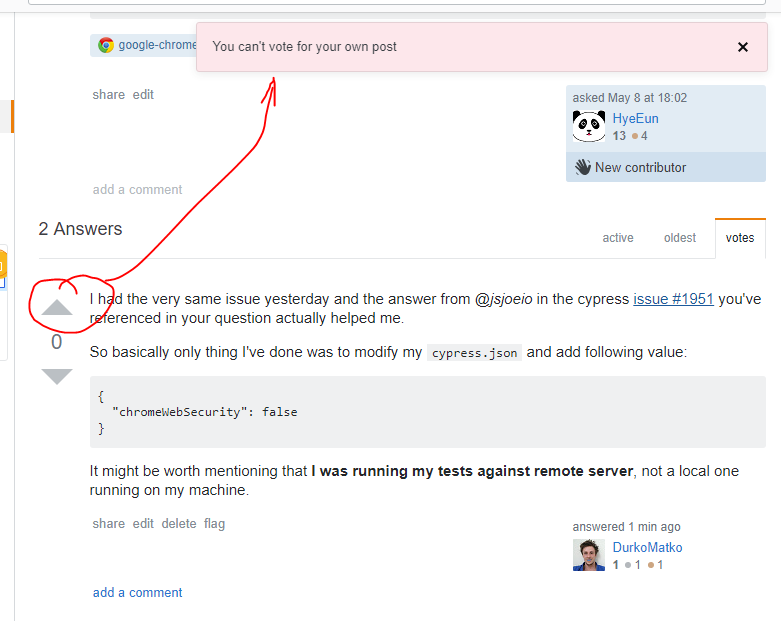 There's an experimental social media platform called Steemit.com where self-voting is allowed and it's causing the whole ecosystem being flawed..

Not the answer you're looking for? Browse other questions tagged discussion voting .

1226
Encouraging people to explain downvotes
1095
Should 'Hi', 'thanks', taglines, and salutations be removed from posts?
925
Why aren't people voting for questions?
1494
Fastest Gun in the West Problem
1843
Could we please be a bit nicer to new users?
1250
Don't throw away all votes when a user is deleted
2793
A Terms of Service update restricting companies that scrape your profile information without your permission
2507
Firing mods and forced relicensing: is Stack Exchange still interested in cooperating with the community?
2258
Stack Overflow is doing me ongoing harm; it's time to fix it!