When you display the vote-count of a post and mouseover, a tool tip like this is shown: 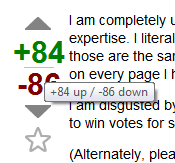 While it's clear that "-86 down" is referring to the number of downvotes, wouldn't it be more straightforward to have the tooltip say "84 up / 86 down" without the plus and minus signs? Especially with so many sites geared toward people who are used to a double negative meaning positive (which would mean an overall score of 170 in this example). Minus eighty-six down just doesn't make sense. Plus eighty-four up is correct, but partially redundant.

The next build will remove the + & - on the title for that element.

They're that way in the first place as a consequence of some code re-use, I agree that they're redundant and possibly confusing.

Not the answer you're looking for? Browse other questions tagged feature-request bug status-completed down-votes vote-count .

546
How about a "Vote not to close" option to counter the "Vote to close"?
201
Show Total Votes (or Up/Down Votes)
852
Can we have the ability to retract a close vote before it closes?
124
Deleting a comment (mine) shouldn't count as a comment vote
146
Please enable low-rep users to easily breakout up and down votes on their own questions
28
View vote count privilege should be MUCH easier to gain
62
Rep for "view vote count" privilege should be lower (on meta)
417
Decision on rejected edits should be displayed as a notification to the editor
253
Increase close vote weight for gold tag badge holders