Do you really need the pen icon?

Since the comment edit ability was added, the window has always been 5 minutes. The main reason for the pencil icon was to protect Obama. But I really don't think people are so trolly as to abuse comments in this way. It's just such a silly thing to do (change your comment so it looks like some one else has an angle on something that they do not), that I don't think it's ever happened.

So the pencil icon is just, there. I don't think it displays useful information though. The only problem with the pen icon is, you might not want to fix that typo because of the pen.

1) The comment editing window is short enough that most edits happen before a response occurs. I've never had to edit a comment after someone responded to it, nor have I really wanted to.

2) If I ever edit a comment, it's to further refine what I was originally saying or fix a typo, not radically alter my stance.

3) It's slightly inconsistent to not record any indication of an edit history for quick edits to questions and answers that occur immediately after posting (which also potentially have the Obama problem, but that doesn't ever seem to appear), but to have a pen indicator for comments.

I just don't think any users try to change their stance very radically in a 5 minute window. If that ever occurs, I'm pretty much the second participant in the conversation will call the first person out on it -- the window is 5 minutes after all.

The pen icon not only shows a comment was edited, but also displays how many times it was edited (in its tooltip).

This can be useful information, not only to protect Obama, but to get an idea on how representative of its original incarnation the comment currently is. 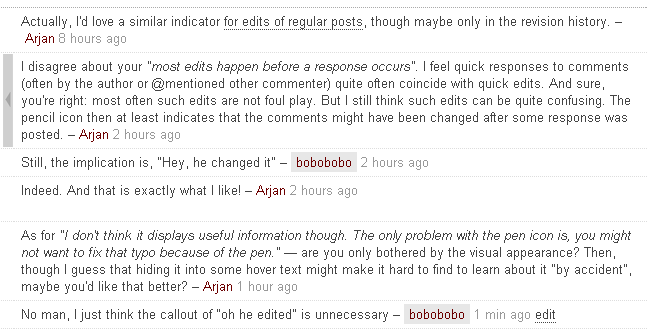 Edited comments get that gray bar at the left. The bar is actually lighter gray and subtler than I've shown here. When you click it, it loads the previous version of the comment.

91
Should we be allowed to edit comments?
23
Please ditch the five-minute window on comment editing
16
Add an indication that a post has been edited in the 5 minutes grace period

593
Exit strategies for "chameleon questions"
333
Don't remove the @ part of my comment
356
Reject an already-approved suggested edit when rolling it back
535
The current review system encourages fake reviews; some people upvote everything rather than actually fixing problems
715
Your answer is in another castle: when is an answer not an answer?
2474
Firing mods and forced relicensing: is Stack Exchange still interested in cooperating with the community?
717
Dear Stack Exchange: a statement and a letter from your moderators
1555
Thank you, Shog9
738
New Feature: Table Support