Downvotes probably in error due to tag confusion - can anything be done?

This is a strange situation on someone's question that I answered. I couldn't find a similar question on Meta.

The question was tagged "C#" because it was asking about how do something in Cache Object Script that you can also do in C#, and gave some C# code to illustrate. It was tagged "intersystems-cache" as well, and specifically asked how to write the code in Cache (which is admittedly an abysmally stupid and confusing name for a language, but the OP isn't responsible for that).

The question (predictably I suppose) got a few downvotes because it appeared to some people as a deeply confused question about C#, even though there was enough information in the question to figure out that it was not, so in all probability the downvotes were a mistake.

My main concern is that perfectly valid questions (including this one) about the "Cache" language will get deleted due to downvoting by C# programmers that misunderstand the questions, since C# developers probably outnumber Cache developers at least 100 to 1 in the world at large, and at least 1000 to 1 on this site.

Is there anything that can be done about this?

discussion down-votes
Share
Improve this question
edited May 23 '17 at 12:35

Just because a question is valid doesn't make it good question. A question is bad if the first tag on the question is easily misunderstood by that audience.

So why is there a misunderstanding? 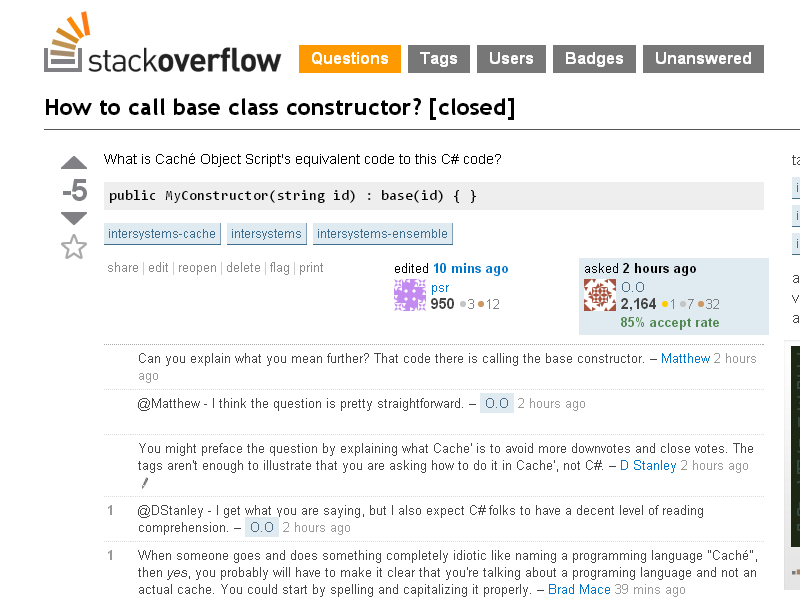 Is there anything that can be done about this?

In addition to the good suggestions about how to ask a better question, it might be advisable for people voting on questions (up/down or close/open) that see one or more tags that they don't know the meaning of to consider whether they are truly qualified to render an opinion in the form of a vote, prior to voting.

Doing otherwise risks crushing small and obscure SO sub-communities with votes that more informed community members would not make.

And yes, I admit that I don't remember to read the tags 100% of the time myself, and that certainly much of the burden falls on those asking questions.

Not the answer you're looking for? Browse other questions tagged discussion down-votes .

592
Exit strategies for "chameleon questions"
382
If you're gonna talk Politics, you must respect those who disagree
424
Goodbye and thank you, Jaydles!
2460
Firing mods and forced relicensing: is Stack Exchange still interested in cooperating with the community?
310
A Pronominal Proposal
320
How can we help Monica Cellio?
967
Firing Community Managers: Stack Exchange is not interested in cooperating with the community, is it?
550
The company’s commitment to rebuilding the relationship with you, our community
580
We're switching to CommonMark
305
Goodbye, Prettify. Hello highlight.js! Swapping out our Syntax Highlighter