Show the post's comments on the "Suggested Edits" review interface

Having recently reviewed a few suggested edits, I've found that not being able to see the comments on the post is hindering my understanding of the context of some edits.

In particular, there have been a few posts where someone has made a substantial edit to a question or answer which significantly alters its meaning. Typically I'd reject that as "too radical", since it can't be known that the new meaning of the post was what the original author intended.

However, in some cases it is clear from the comments that the original author is aware of the intended change, and as such the editor is not in fact misrepresenting the author's intentions. In these cases, it would have been useful to see the comments when making the review decision.

As an example, a common cause of this is when an inexperienced user is asked to clarify their question, and ends up writing a comment that would be better off as an edit to the question (due to length, excess code content, etc), presumably due to lack of awareness that the question can be edited. Often, other users will helpfully edit the question to include the information the OP put in the comment (see here, here and here for examples). In this situation, it is clear that the edit reflects the OP's intentions, but this information is only present in the comments which are not visible in the review interface.

Following is the suggested edit screen showing the suggested edit. It seems indentation is increased and one line is moved a few lines upwards and some empty lines added to increase readability. But it look like an invalid edit since changing the related line may cause alteration on the runtime. So not looks lie a valid edit. Better open the answer and examine it 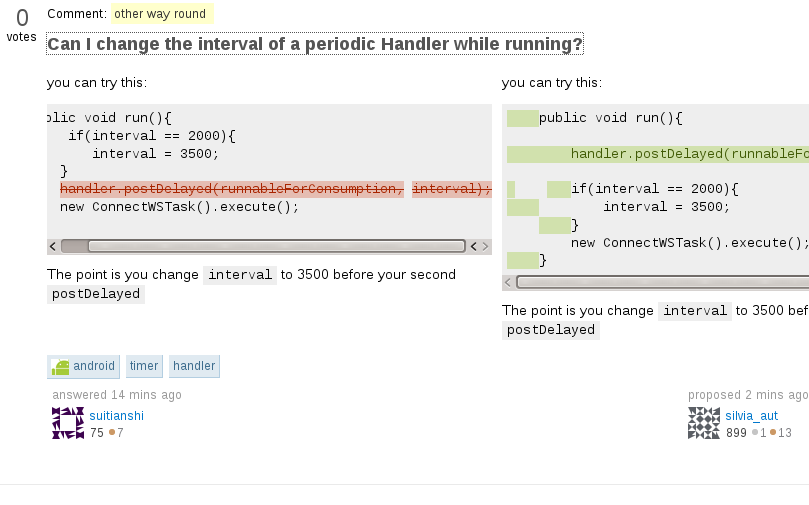 Checking the Q&A itself reveals that a talk had taken place between the OP and the answerer and revision done by the OP with the permission of the answerer. So it was indeed a valid edit. 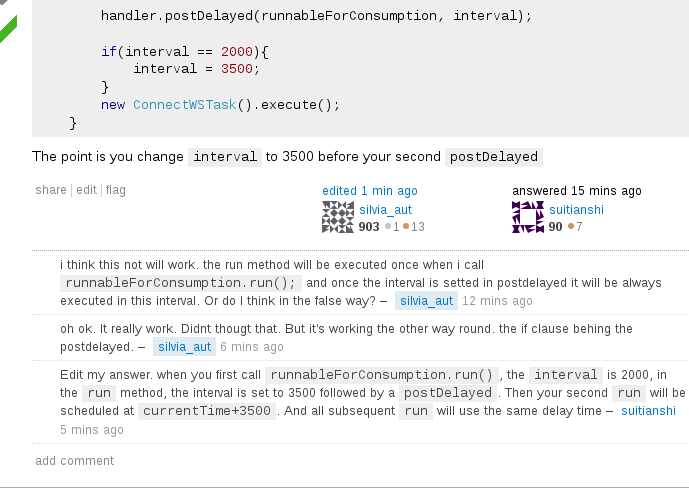 In short: is there any particular reason comments are not displayed in the suggested edit review interface? I think it would add useful contextual information when making review decisions, and presumably this would be trivial to implement.

Note: this is not a dupe of this post, as it does not concern comments posted after the suggested edit.

feature-request suggested-edits review
Share
Improve this question
edited May 23, 2017 at 12:35

(I was going to ask this as a question, but found this dupe while I was typing, so I'll add it here as an answer instead.)

I rejected this suggested edit as "Too radical" because, on the face of it, the editor has interpolated their own information; they've added data that is nowhere in the original question. The reviewer comment is "formatting for command line, add referenced properties, fixed spelling".

I was a little too hasty, though, because if you look at the actual question, you can see that for some reason the OP provided this information in a comment to their own question. That's what the editor meant by "add referenced properties", I suppose, but I missed that.

So I'm here to add my vote for this feature: can we please see the comments on an edited question or answer, to help us understand the context of an edit? I realize yeah, I can get to the info if I want, but sometimes, like this time, it's just not obvious that there's a reason to do so.

My approach to this is to reject edits that add material or change code UNLESS the edit revision comment says something like "incorporated background from comment by question-asker" or "adding code from answer by question-asker" or otherwise makes it clear to me that there is more going on here than meets the eye. Then I will right-click-opn-in-new-tab to take a look at the question in context, with comments, other answers etc.

If you react to all additions of material with a trip to the original question you're a better person than me. And maybe you're encouraging edit-suggesters not to explain themselves properly? The revision comment is there for a reason...

Common reasons for edits inlclude ... To include additional information only found in comments, so all of the information relevant to the post is contained in one place.

This directly conflicts with the suggested edit review UI, which does not show comments for answers (although it shows them for questions).

As a consequence, I generally see all such edits to answers rejected as too-radical or attempt-to-comment. The review UI quite handily directs all reviewers away from following that guideline, and comment display needs to be added to answer reviews if you truly want the community to follow current editing guidelines. 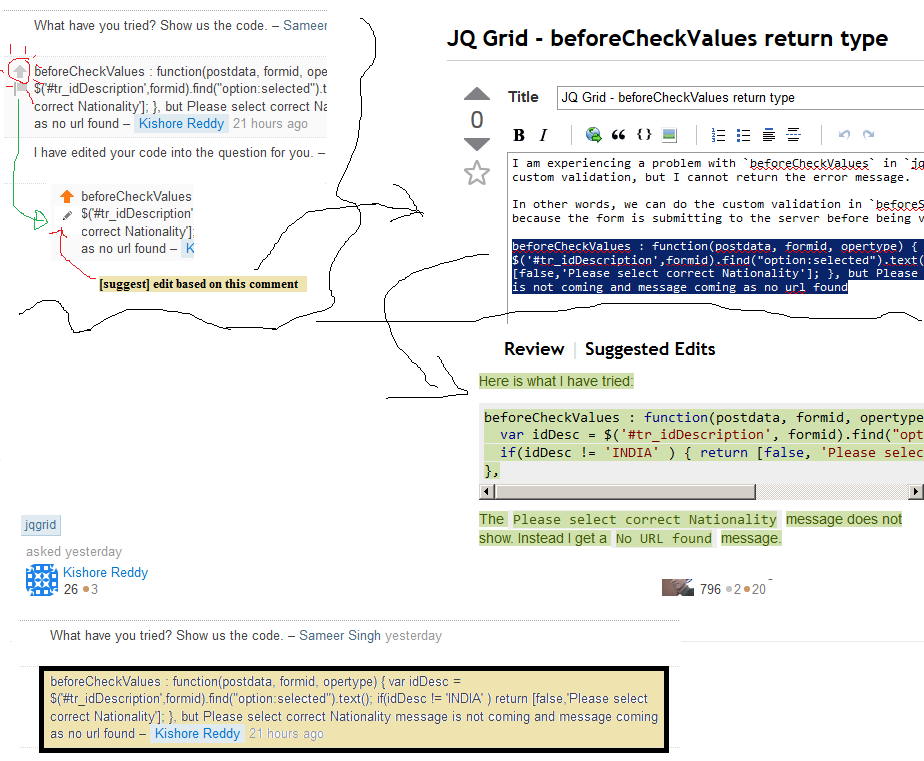 edit in fact, for the editor's convenience, the clicked-on base-comment might also be added to the bottom of the post and preselected (e.g. for one-key deletion or conversion to a quote)

* The "suggest" would not be shown for users with the required edit privilege (<2k rep or OP), yet this option would allow to link an edit to a helpful comment

Here's a list of examples where this feature might have been useful, please feel free to expand on it:

5
Show comments while suggesting edits or reviewing first posts
5
Show comments in Suggested Edits review queue
4
Review queue for questions should show comments on question
3
Have suggested edits also show the comments to a post
30
Do reviewers need more coffee?
13
Is it appropriate to edit another user's answer to include important information from their own comments?
28
Editing: add a "require author approval" checkbox
10
Allow linking (suggested) edits to one comment
2
Allow Suggested Edits reviewers to leave comments for other reviewers
3
Comments on posts with pending suggested edits
See more linked questions

865
Allow an edit to notify downvoters: "I think I've fixed the issue now - please check"
993
Show all of my question/answers to me even if they are deleted
303
How do suggested edits work?
419
Decision on rejected edits should be displayed as a notification to the editor
359
Reject an already-approved suggested edit when rolling it back
540
The current review system encourages fake reviews; some people upvote everything rather than actually fixing problems
394
The robo-approvers are killing my will to review edits
421
Add an "I don't understand" option for review audits