We all know how big chat rooms can advance quickly. Is there a way (or a future plan) that I can view a linked message and it's predecessors in a different view/page/thread? So they are all in a single reading pane?

While hovering a message and seeing it's predecessors is nice, it isn't easy to read, especially when the linked threads get long.

We discussed this internally the other week and we agree that this would be handy to have. Especially in cases where a moderator pings several community team members at a time and one of us responds before the others.

Using our existing chat UI and some inspiration from how Twitter shows linked tweets, we would like to propose the following implementation.

This conversation view will be accessible from the pop-up you get when clicking on the arrow to the left of every message: 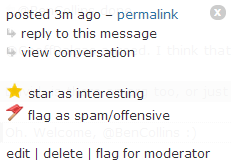 Clicking "view conversation" would go to a view similar to the existing chat transcripts. It will show the current message, the message it is in reply to (and the ones before it), as well as the messages that were posted in reply to it. Plus a message or two around each of those, just to account for people like me who are fond of posting a linked @reply, followed immediately by another related message that's not linked to anything else.

Other messages that appear in the transcript can be hidden and indicated the same way the Highlights view shows skipped posts:

Ideally, clicking that would expand the transcript and show the messages that were hidden, but that's optional. Using one of the displayed messages to get to the full transcript would be easy/good enough.

A simple improvement in the short term might be to simply allow two-way navigation between chat messages. If a message is a reply, I can navigate back to the previous message. However, there's no way to jump to descendants that I can see. Even if they aren't viewed on a separate page, improving the navigation would be a step in the right direction, I think.

4
Add threaded view to chat
6
How can I bookmark a chat?
3
Zoom to a specific user or conversation in Chat
3
Chat highlighting should work in transcripts as in actual chat

856
Can we have the ability to retract a close vote before it closes?
185
Can we get a comments only lock?
163
Flags in chat are defective by design
313
Operation 'Split, All The Metas!' Shall Commence On April 16, 2014
190
We're more aggressively enforcing self-moderation in chat
583
We're switching to CommonMark
761
New Feature: Table Support
216
Deprecating our mobile views