What other hidden or inobvious RSS feeds are available on Stack Exchange and its sites?

I know about finding the RSS feed icon at the bottom of any "Top Questions" page, giving access to recent, featured, hot, week & month questions feeds. I also know that you can get RSS feeds from tags such as support and even construct searches with specific tag and view combination.

Also, I have just discovered that you can get user responses feed and by inference a full user feed, and even use boolean operators on tag combinations, but I don't know what other user related feeds are available.

So, to summarise what feeds I can identify so far:

So, what other RSS feeds are available?

So far I have been unable to find any canonical list of what is available, just the occasional meta post containing partial information. So far there have been no responses to What feeds are available? while the Community FAQ references a question which is no longer appears relevant (as far as I can see).

This is not an answer, but a way to using these feeds.

I've recently discovered rsstail and multitail, both by Folkert van Heusden. These are utilities which allow you to create, effectively, a "tail" of an RSS feed (for rsstail), or of one or more files and/or processes (for multitail), in a terminal window.

multitail adds a bunch of additional features, including color highlighting (a bit gaudy, but configurable), scrollback, search, timestamping, and other capabilities.

Getting multitail to read, say, a whole list of feeds is a bit complicated, but I've glued up some AWK script which will create an rsstail process for each feed in my newsbeuter URLs file (newsbeuter is an interactive console RSS reader), and follow those. More on that here.

Though if you just want to follow an individual Stack Exchange question's feed, you could run something like:

(That will give you this question's feed.)

For impromptu monitoring of some specific feed or list of feeds, this is pretty handy. Since it's just running in a terminal, you don't have to remember to clear the temporary additions out of your newsreader at a later date, it's intrinsically ephemeral. 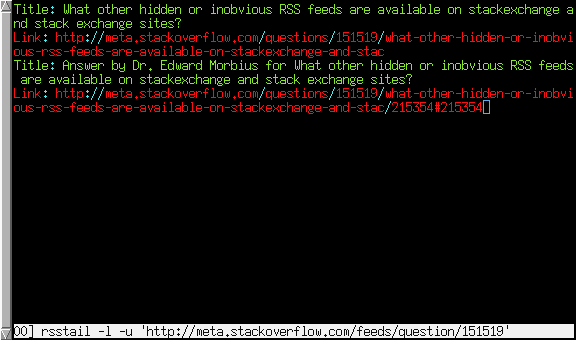 Some more feeds of Stack Exchange:

The following are not legitimate Area 51 feeds:

The Stack Overflow blog, The Overflow, has some feeds:

Similar feeds exist for the chat servers of Meta SE and SO.

Not the answer you're looking for? Browse other questions tagged support rss .

512
What HTML tags are allowed on Stack Exchange sites?
752
Which tools and technologies are used to build the Stack Exchange Network?
820
What are the badges I can earn on each site, and what are the exact criteria for earning each badge?
3
RSS feeds for a set of tags (with OR clause) are broken