With the exception of spammers, who either just get their posts spam-flagged to death or are destroyed by a moderator, the by far most common reason for deleting a user is that the user requests himself that his account be deleted.

The guidelines from SE used to be that we moderators should wait for 24 hours and not immediately delete the account. This is supposed to give the users some time to reconsider, as the request for deletion is often made during some heated dispute. And deletion is not reversible, SE developers can piece together most parts of a deleted account, but that is a manual and incomplete process.

I propose to hardcode this delay into the user deletion mechanism. When a moderator hits the delete user button, a countdown is started until the deletion. This countdown is visible to the user (at least on his profile, also elsewhere if it would be easy to implement), and contains a link to contact the moderators and abort the deletion.

This would not only make sure that users have a chance to reconsider the deletion, but it would also help against mistakes by moderators when deleting accounts. As the recovery of a deleted account is a rather involved procedure, I think it would be worth it to try to minimize the chance of this being necessary.

Doing the whole delay manually has two problems: Moderators actually have to know about this, which is not the case for a large number of moderators, I think. And we have to remember to delete the account later, which can easily be forgotten, especially if one mod thinks another one will handle it.

Deletion of spammers would not be affected, as moderators use the "destroy" feature for them, which not only deletes the account, but also all associated posts.

I like this idea. The current process works pretty well most of the time, but let's face it: it's error-prone, and pretty difficult review even when deletions are appropriate.

We now have selectable reasons for user deletion, which makes this even easier. If "User requested deletion" is selected... 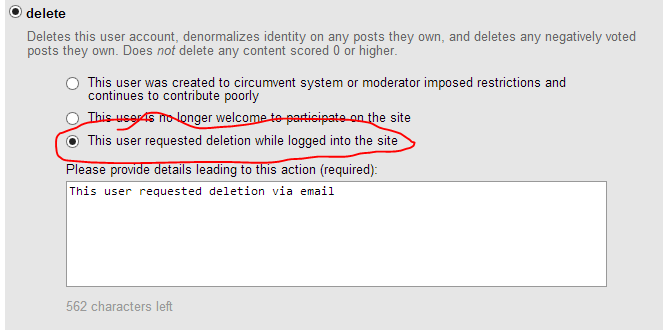 ...then set a flag on the profile. A scheduled task can check for this flag and delete any accounts where it has been active for more than 24 hours.

Implementing this for only one deletion reason simplifies the cancellation process as well: the countdown could allow the user themselves to cancel deletion, rather than requiring them to contact a moderator:

Such a banner, visible on the user's profile page to only moderators and the user themselves, would provide a quick and easy way to undo mistakes and provide a frictionless way for users with second thoughts to cancel the deletion without having to contact a moderator or the team.

Finally, both the deletion scheduling and cancellation should be logged, so as to avoid confusion over what happened and who was responsible.

Is this really necessary? It feels awfully patronizing. Couldn't we just hold users to the expectation that they act like professional adults?

Users have to make this request to another person, so that affords some protection already. It's not as if someone can accidentally click the "delete account" button. A moderator can always ask them why they want their account deleted and suggest that they sleep on it if it seems like they'll regret the decision later.

Similarly, the easiest way to avoid the difficulty of reconstructing an account that a user requested deleted is to say, "Sorry, deletion is permanent." I'm somewhat aghast at the idea that developers are spending time reconstructing accounts that people requested be deleted. Spending more development cycles to better support protecting users from themselves isn't tempting.

At the very least, this must be a rare enough occurrence that it shouldn't be high priority. I assume that users aren't frequently requesting deletions, aren't there more important things to do?

What about making deletion undoable, or "soft deletes"? Surely an easy way to correct mistakes beats simply making it unlikely (but difficult to undo).

If there is a concern regarding PII*, the following simple workflow would maintain privacy:

Alternatively, all PII could be purged (name, surname, profile).

Not the answer you're looking for? Browse other questions tagged feature-request status-completed moderator-tools deleted-accounts .

273
How can I delete my account?
25
Improve the user self-deletion process
12
Why has my account on Stack Overflow been removed/deleted?
4
Allow suspended users to request account deletion

1221
Encouraging people to explain downvotes
992
Show all of my question/answers to me even if they are deleted
273
How can I delete my account?
399
Add a way for moderators to cast a normal, non binding close/open vote
1245
Don't throw away all votes when a user is deleted
185
Wiping votes on deletion of highly active accounts (-865 points on "User was removed")
183
A question should not be deleted by the user deletion algorithm if it has upvoted answers
307
Moderators should be able to manually ban users from suggesting edits
274
Make moderator messages anonymous