I don't think it would be a bad idea to allow tag "locking". The trouble is, we have some deprecated tags which we don't want to accept new questions for, but we can't just burninate mindlessly. The primary example of this is the homework tag. It's supposed to be obsolete, but new questions flood in every day because people don't take the time to read the tag description.

Locking a tag (or alternatively, deprecating it) would allow the removal of such tags from questions but not addition. As a fallback, questions can still be rolled back to a state where they possessed the tag in case a poor edit is made, but it cannot be added manually.

Without such a feature, I fear that the homework tag is here to stay.

We actually have a feature now that essentially does this. It's tied into the tag blacklist, which only a developer can modify, but for cases where a tag really needs to be blacklisted while it's being cleaned up, or just needs to stick around for historical purposes (extremely rare), we can attach a custom message that will appear when someone attempts to use the tag, like so: 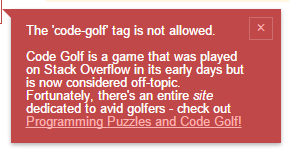 If there's good reason to blacklist a tag, and it's actually a serious problem, then a moderator can contact the Community Team to request it. Preferably there should be a Meta discussion about it already.

In regards to Nathan Tuggy's answer, this feature does require the removal of the blacklisted tag when someone attempts to edit. The system won't let you submit the edit without removing or replacing it.

I like this idea. It gives users a clear indication as to why a tag can't be used, even though they see the tag applied to many other questions. It could also offer some tag specific advice on how to ask a question where a deprecated tag would be applied.

All in all, it would cut down on negative experiences, while giving the 'janitors' a fighting chance.

The reason we don't blacklist a tag until it's all but gone is the UI basically says "You can't add that tag", which confuses the heck out of people when they see it applied in lots of places. Similar frustration exists where the system demands that you tag a question, then tells you that you don't have the rep to create new tags.

Presumably if a tag that was widely used is now deprecated, there's a meta discussion about it. The deprecated / locked notice should point to that, while providing a short tl;dr; summary of why we're not allowing it any longer.

It seems to be the most considerate option, overall.

There is a caveat which could be a source of frustration. If someone edits a question where the tag is applied without removing the tag, the system will demand that the tag be removed. Whether we want to allow saves when a tag is merely locked instead of blacklisted (thus defining an even clearer distinction between the two states) warrants additional discussion if this is going to be implemented.

How about something like changing the display of tag from

Now old question that have such tags displayed in such way will probably raise the question why? Or even when adding such tags to new question they will certainly be curious, why does it have a strikethrough, then

And whenever such deprecated tags have been added, you can then restrict the submission of the form, thus ensuring that the information is delivered and system is clean of new questions of deprecated tags.

There are two relatively minor aspects of this proposal that don't seem to have been quite adequately covered in the discussion so far: meta discussion linkage, and whether to require removing deprecated tags upon editing a question with them.

Usage guidance does not support any markdown, even links that work as links, so there's only one way at present to link to the discussion, and that's to put the link in the full wiki. That's a little awkward, but it might be the best we can do. However, with a bit more coding, it seems to me a UI tweak could be rather useful to enable one of two other possibilities. The first of these is to show, instead of the usage guidance, only the title of the meta discussion, linked to that discussion (the URL would be required when deprecating). The second is to replace the link to the wiki (info) with a link with the same text but href of the meta URL, as before.

I don't think it's necessary to require editors to remove all deprecated tags when editing; simply displaying the struck-through tags in normal and edit view is a reasonable hint, and if we want to get pushier, a warning box when the edit form comes up would do a good job of driving home how important it is to remove the tag if possible, without absolutely barring contributions from those who really don't have the knowledge to remove the tag properly from that particular question. (Or worse, causing poorly-chosen replacements, if the tag is the only one on the question.)

Not the answer you're looking for? Browse other questions tagged feature-request tags .

75
Implement a Tag Black List
3
Disallow homework tag
15
Can we improve the migration process for questions from Stack Overflow to Joomla Stack Exchange?
17
What is a blocked tag?
28
Cleaning Up Google Tags
4
Why do we have the C++14 tag?
5
Semi-blacklist tags (put tags on hold)
2
Burninate code-review tag?

852
Can we have the ability to retract a close vote before it closes?
275
Add the ability to ignore users
185
Subscribing to questions and comments that don't belong to you
17
A better way to mark tags as obsolete / deprecated