Ask Question
Asked 9 years, 1 month ago
Active 5 years, 3 months ago
Viewed 4k times
15
This question already has answers here:
Am I allowed to be (at least a little) ignorant on SO? [closed] (10 answers)
Closed 7 years ago.

I noticed that this question (about basic C# syntax) received a lot of downvotes as soon as I posted it. Is there any specific policy against the posting of questions with "obvious" answers on Stack Overflow?

I'm unclear as to why questions with "obvious" answers aren't usually well-received by the community - are beginner questions considered harmful for some reason? ("Obvious" is a relative term, of course - this type of question would be helpful to anyone who was learning C# for the first time, but it wouldn't be helpful to an experienced C# developer.)

support asking-questions
Share
Improve this question
edited May 23 '17 at 12:35

On Stack Overflow, and Stack Exchange in general, we have two review systems for questions:

There is no policy against beginners' questions, for every definition of beginners, they are welcome on Stack Overflow. However, being a beginner is not an excuse for not putting at least some effort to solve your own problem before asking a community of volunteers. In a recent discussion on Meta Programmers, jmort253 puts it excellently:

The question has some issues that could cause people to downvote it.

Remember, downvotes mean: This question does not show any research effort; it is unclear or not useful. If you hover over the downvote arrow, that's exactly the text that is displayed.

That question is a shining example of no research effort. If I were to google, "How do I run a C# program on linux." I get a lot of results: 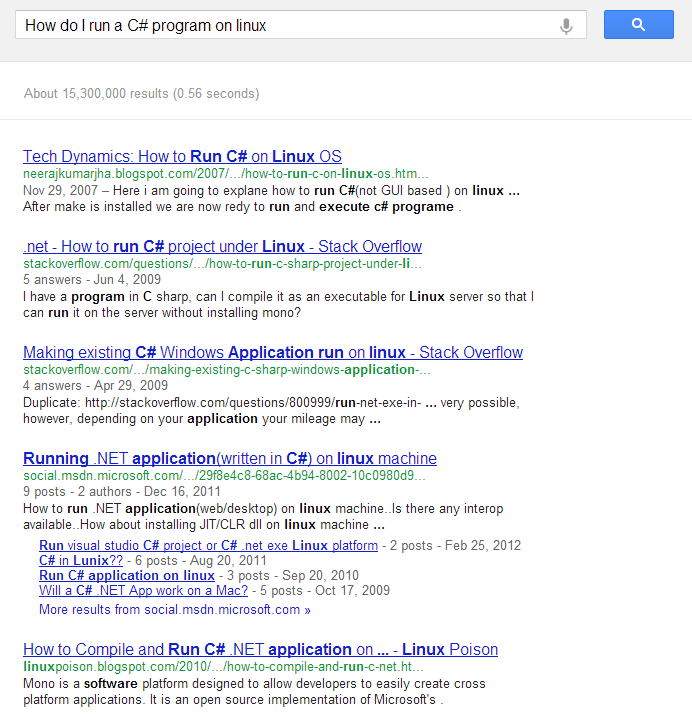 Are you going to tell me that none of those answers help?

If you put the effort, or more correctly show that you've put effort into researching your question, it's unlikely you'll be downvoted. However, if you post a question that seems to show that you didn't even search for the answer first, you're going to get downvotes.

From the FAQ, Stack Overflow is a site for Programming Professionals and Programming Enthusiasts. I believe that this makes it hard for us (pro's and enthusiasts) to empathize with new members and beginner questions.

What is the bar for research effort? It's subjective, and so can't fairly be applied, so instead, just flat out ban beginner questions because they have no relevance to SO.

I think what's more true for every new beginner question, there's likely an applicable duplicate already in the system. So do we prevent beginner questions? No. Do we aggressively close them as duplicates when found? Absolutely. And downvote for poor research.

The problem with this approach is that "poor research" is subjective. Along with closing dupes, and downvoting poor quality questions, I believe we should educate beginners to Stack Overflow. It's very obvious when the dupe shows up, as well as a Google search of the same question returning multiple sources with the solution, to point out they should first attempt to google, or search the site.

But what about when that's not the case? Googling that question doesn't return good results, so at least by the Google test, it was fine. Also, it wasn't closed as a dupe. Instead it was downvoted as a beginner question, for lack of research. The comments (since deleted by a mod) to the OP suggested she should try to have an attitude of learning before asking a question. As a Quote above in a previous answer suggests--that she was an idiot for not doing research.

The problem with allowing beginners is that there isn't a positive way to help them be successful. A deluge of downvotes, comments akin to "RTFM", and closed questions isn't welcoming, and is counter to the spirit of which I believe SO was built.

For what it's worth, I believe beginners should be allowed, and new people to our site should be given a chance to learn how to better use our community. As it stands, we don't have a way to do that.

Not the answer you're looking for? Browse other questions tagged support asking-questions .

509
What HTML tags are allowed on Stack Exchange sites?
613
Formatting Sandbox
750
Which tools and technologies are used to build the Stack Exchange Network?
1016
What are "Community Wiki" posts?
788
Recent feature changes to Stack Exchange
817
What are the badges I can earn on each site, and what are the exact criteria for earning each badge?
269
What can I do when getting "We are no longer accepting questions/answers from this account"?
1065
Why is Stack Overflow trying to start audio?
970
Firing Community Managers: Stack Exchange is not interested in cooperating with the community, is it?