I've been accessing the SO review page from my phone when I have breaks at work... twice tonight I hit the wrong button while reviewing due to the fact that the buttons are so small and spaced so closely together on a screen that size. Fortunately, the posts in question were so bad I had no fear that the mis-vote would tip the scales, but it irritated me that it happened.

I realize that I can zoom the buttons to spread them out, but that really interrupts the flow, having to zoom out to be able to read the text and then zoom in to spread the buttons out so my fat fingers don't mash the wrong one. :p

Is there any plan for a mobile version of the review page that might help to mitigate this issue (I made sure my phone browser was in mobile mode and loaded the page and it seemed the same as the desktop version)?

Or, if that's not in the cards, would it be possible to move the buttons a bit further apart to minimize the chance of accidentally hitting the wrong one?

You can't really tell how small the buttons are from this screenshot, but as a reference, the tip of my index finger covers any two of the review action buttons at once. Spreading the buttons further apart would definitely improve the ability to hit them accurately. 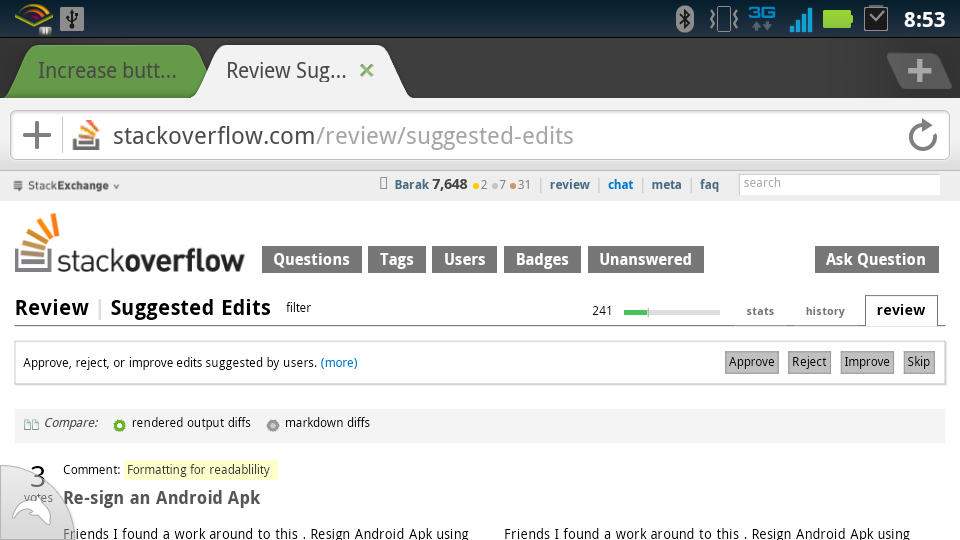 540
The current review system encourages fake reviews; some people upvote everything rather than actually fixing problems
33
Add an Image Upload button to the Mobile Site
395
The robo-approvers are killing my will to review edits
363
What are review tests (audits) and how do they work?
7
Who stole my review button? - Review icon hidden on mobile, help icon shown instead
121
Visual design changes to the review queues
216
Deprecating our mobile views