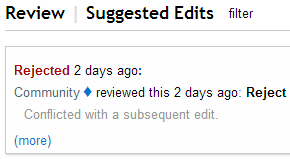 As noted in this other answer, the community user is rejecting quite a few suggested edits lately (examples from same user 1, 2). Perhaps there is some issue with it? If this behaviour continues, it will likely put people off suggesting edits and that would be a shame seeing as they are trying to improve on the quality of the content on the site.

7
Explain why suggested edit is being rejected by Community
798
Recent feature changes to Stack Exchange
417
Decision on rejected edits should be displayed as a notification to the editor
111
Why does the Community user approve and reject edits?
83
Suggested edit rejections for concurrent edits should not count for the suggested edit ban
71
Can the system leave a deletion reason when it deletes a question?
34
Why does the Community User reject / approve edits?
17
Edits that shadow a suggested edit inconsistently reject but include the suggestion
17
Improved edit suggestions approved by Community
13
What caused Community ♦ to reject this particular edit suggestion?
See more linked questions

863
Allow an edit to notify downvoters: "I think I've fixed the issue now - please check"
203
Avoid the Streisand Effect - be clear about the reason when suspending an account
301
How do suggested edits work?
417
Decision on rejected edits should be displayed as a notification to the editor
51
Allow adding a custom reject reason when marking an edit as "Reject and Edit"
1248
Don't throw away all votes when a user is deleted
358
Reject an already-approved suggested edit when rolling it back
18
The "Reject and Edit" reason is not always accurate
239
Review queue workflows - Final release